It has been reported via a Japanese blog site that issue #5/6 of Weekly Young Jump has announced a preview screening of Dragon Ball Z: Battle of Gods on 12 March 2013. There are five screenings scheduled across Japan (listed below) with a limited number of attendees that will be determined from a lottery selection. To participate in the lottery you must return the entry ticket included in the magazine by 20 February 2013. A listing of other recent Shueisha magazines that also feature these lottery tickets is provided, which includes Weekly Shōnen Jump, V-Jump, Jump SQ, and Ultra Jump. 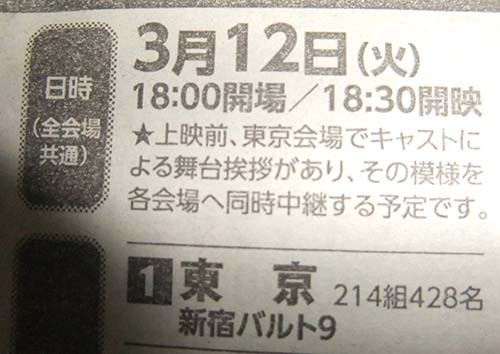 The screenings are set to begin at 6:30PM, with the doors opening at 6:00PM, at the following venues:

As a special treat to those attending the Tokyo preview screening, some of the movie’s cast will be providing a special introductory greeting message, presumably in person.

Thanks to forum member DragonBoxZTheMovies for the heads up on this.