FUNimation’s high definition, remastered Blu-ray release of the Dragon Ball Z TV series lasted all of two volumes and about six months between original announcement and a release hiatus/suspension.

The company has mostly avoided talking about continuing the series in such a format since then, falling back on promoting the (cropped/widescreen) orange brick season sets originally released from 2007-2009 after completing the “Dragon Box” run and working on the “refreshed” Dragon Ball Kai TV series.

Today, FUNimation launched a new survey asking fans about their purchase history with the franchise and continuing with a new Blu-ray release, which would tentatively span nine volumes (similar to the DVD bricks) and cost $44.98.

Perhaps most interestingly, the company is specifically asking about aspect ratio preferences: 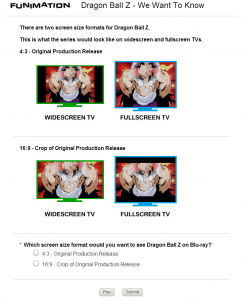 While the orange brick sets were cropped to 16:9 removing approximately 20% of the original picture, FUNimation’s “Level” Blu-ray sets remained in their original 4:3 aspect ratio. FUNimation also released Dragon Ball Kai on both Blu-ray and DVD in its original 4:3 production aspect ratio.

FUNimation’s question about which year you started watching the series starts with 1996, the year that FUNimation themselves began airing their dub of Dragon Ball Z in syndication.

Visitors of Kanzenshuu that select a 16:9 preferred viewing option for a 4:3 original production will be considered non-canonical readers and will promptly be shot out of a cannon.

Thanks to everyone who gave us the heads-up!

8 Comments
Connect With Us
Support Us
Your support for Kanzenshuu is what keeps us going. You can help by donating to us directly, or by shopping online at certain retailers through our affiliate links below. Every bit counts and helps contribute to our server fees and bringing you new site content, reviews, and contest items.