The UK branch of Bandai Namco announced today that the Vita version of Dragon Ball Z: Battle of Z will be receiving an update to enable the Japanese voice cast in the game. The Vita version, released in some territories as download-only, also only received the English voice cast outside of Japan. The console version (PlayStation 3 and Xbox 360) features both the original Japanese and English voice casts by default already included as a part of the base purchase. 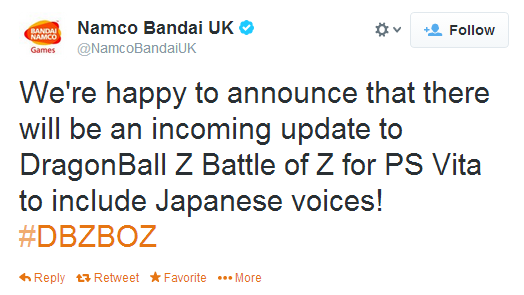 There is no word just yet on whether or not this will be a free or paid update. Furthermore, right now this announcement is only coming from the UK branch of the company. We have inquired with the North American branch regarding any plans they may have and will update this post accordingly with any further information we receive.

Thanks to dbboxkaifan for the heads-up.

Additionally, forum user Sshadow5001 posted this morning that they were able to purchase the Japanese paid downloadable content — Super Saiyan Bardock and Super Vegetto available at ¥300 a pop — and the content loaded properly into their European copy of the game on the Xbox 360. Downloadable content is generally region-restricted even when the base game is not, so this is a curious development. If any readers in other countries with other consoles are willing to bite the bullet and test things out, we would be happy to report your results!