The official website of the upcoming 2015 movie, Dragon Ball Z: Revival of “F”, has announced that the film will be screened in “4DX” in select venues across Japan. 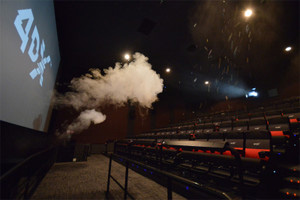 4DX is a proprietary system from South Korean company CJ 4DPLEX (a subsidiary of the CJ Corporation conglomerate), which uses technologies embedded in moviegoers seats to provide an additional element of physical sensation on top of sight and sound. These include seat motion, air jets, spraying mist, scents, fog, and more.

Included with the announcement is a list of 10 (nine currently operational) venues which will be providing the 4DX movie experience. The vast majority are in the Kanto and Chubu regions, with one additional location each in Hiroshima and Fukuoka.