The official website for the upcoming film, Dragon Ball Z: Revival of “F”, updated today with fourteen sets of character profiles for the hero characters.

Story-based confirmations within the profiles include tidbits such as Goku and Vegeta training under Whis, No. 18 being the one responsible for shaving Kuririn’s head as he enters the battle once again, and a reiteration of Gohan being unable to find his dōgi. Yūko Minaguchi will return as Videl (having voiced the character in the 2013 film Battle of Gods, but being unavailable for the on-going Majin Boo arc of Dragon Ball Kai). Shōko Nakagawa, a guest voice from Battle of Gods, will also return to voice the Oracle Fish.

SON GOKU (Masako Nozawa)
A Saiyan raised on Earth, who has protected Earth from numerous mighty foes. He likes fighting against strong opponents, and the stronger the opponent, the more excited he gets. After the battle with God of Destruction Beerus, he is now training under Whis in search of even greater strength.

VEGETA (Ryō Horikawa)
This prideful prince of the Saiyans. He was once a cruel warrior of evil, but through his fights with Goku & co., he has come to have a proper heart. He burns with an unyielding desire to best Goku in battle, and now is continuing his training.

SON GOHAN (Masako Nozawa)
Goku’s son, an Earthling/Saiyan hybrid. He has a quiet personality, and his dream has been to become a scholar since he was a small child, but when it comes time to fight, he wields a power even greater than that of pure Saiyans. This time, he can’t find his dōgi, so he joins the fray in his gym clothes.

PICCOLO (Toshio Furukawa)
A Namekian warrior. He was once a Great Demon King, the evil half of Earth’s God. He is also Gohan’s master, who raised him as a warrior. Together with Gohan, he perceives Freeza’s ki right away, and engages Freeza & co. in battle.

KURIRIN (Mayumi Tanaka)
The strongest Earthling warrior, who became a pupil of Kame-Sen’nin’s with Goku, and who has fought together with him in numerous life-or-death battles. Now he patrols the town as a police officer.

TENSHINHAN (Hikaru Midorikawa)
A martial artist formerly of the Crane School, who had aspired to become the world’s best hitman, but had a change of heart after meeting Goku & co. He had continued on a journey of training apart from Goku and the others, but perceiving Freeza’s massively powerful ki, he rushes to the scene.

KAME-SEN’NIN (Masaharu Satō)
A legendary martial artist who was once famous as the Muten Rōshi, and also Goku’s master. Now, he lives a quiet life at Kame House. Having stayed out of the battles for a while, this time he makes his long-awaited return and joins the fight.

BULMA (Hiromi Tsuru)
The very first of Goku’s friends, who he first met in the mountains. She is the scion of Capsule Corporation, and a genius with machines, such as developing the Dragon Radar. She catches wind of Freeza’s revival from a certain character.

VIDEL (Yūko Minaguchi)
The daughter of world champion fighter Mister Satan. She met Gohan in high school, and married him after the fight with Majin Boo. Now she is the mother of a child.

No. 18 (Miki Itō)
An Artificial Human remodeled by the genius scientist Doctor Gero with the goal of killing Goku. After the fight with Cell, she married Kuririn, and lives together with her daughter Marron at Kame House. She shaves the head of Kuririn, who is serious about his first fight in a long time.

BEERUS (Kōichi Yamadera)
The god who governs destruction, keeping the balance of the cosmos. If he should lose his temper, he will destroy the worlds and lives around him. The mightiest being, who not even Goku could beat as a Super Saiyan God. After the fight with Goku, he fell back into a long slumber, but…?

WHIS (Masakazu Morita)
A man of many mysteries, who works in tandem with Beerus. He is also Beerus’ master, the depths of whose power is unknown. After the fight between Goku and Beerus, he trains Goku and Vegeta, who seek even greater strength.

ORACLE FISH (Shōko Nakagawa)
A mysterious fish that gives prophecies. It once prophesized the appearance of a mighty foe to Beerus, which came true through the appearance of Goku as a Super Saiyan God. Has a careless personality, and will forget even its own prophecies. 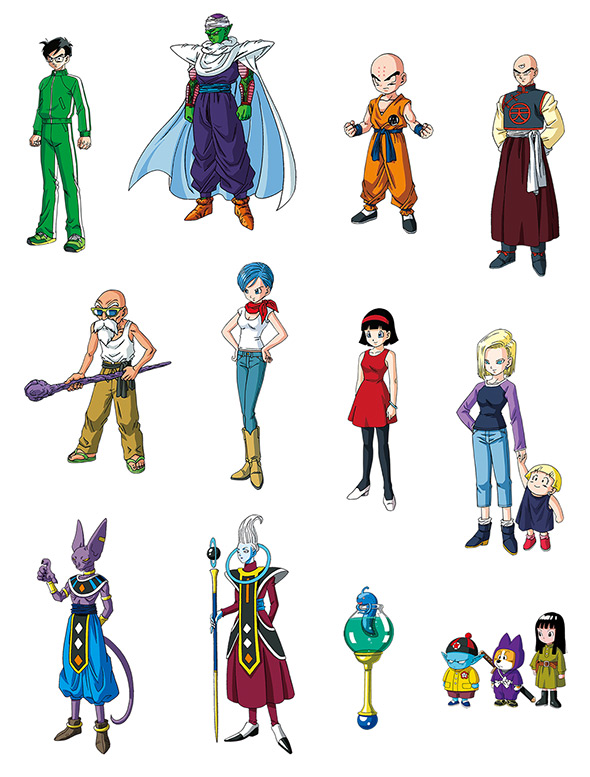