May 9th has always been a special day in the Dragon World, most significantly as the in-universe date in which the world was taken over by the Demon King Piccolo in chapter 153. The date is also an out-of-universe pun on “Goku”, where the date’s numbers, “five” and “nine”, can be pronounced as go and kū, respectively.

In the past, fans and even official rights-holders have unofficially used the date for their own celebrations. This year, however, the “Japan Anniversary Association” has officially declared May 9th to be “Goku Day” (悟空の日) in Japan.

Established by Toei Incorporated, distributors of the film Dragon Ball Z: Revival of “F”, which premiered April 18th. The purpose is to let even more people know about the fun of the anime series Dragon Ball Z (based on the Dragon Ball comic by Akira Toriyama), and the charm of its protagonist “Son Goku”. The date comes from a pun on 5 and 9: Go (5) Ku (9).

Following a showing of Dragon Ball Z: Revival of “F” at the Shinjuku Wald 9 theater in Tokyo, Masako Nozawa was brought up on stage and presented with an official certification from the anniversary association, along with a bouquet of 59 carnations.

MC: What were your thoughts when you heard that “Goku Day” was officially recognized?
I was incredibly happy! Before I saw this registration card, I just thought the staff at Toei had gone “it’s 5/9, so let’s make it Goku Day”. So seeing this registration card and that it’s actually something official was a real shock! When I told the staff that, they went “Obviously we couldn’t have just gone and decided it on our own!” (laughs)

MC: What led to you getting cast as Son Goku?
I was chosen in auditions. They auditioned a lot of other people too of course, but apparently when creator Akira Toriyama-sensei heard my voice, even without seeing my name he instantly picked me. It’s amazing that I’ve been voicing him for 19 [sic] years now.

MC: I heard you talked with Toriyama-sensei during the last film, Battle of Gods. What’s he like?
He’s really friendly and easy to talk to. I had heard before from people at Shueisha about how Sensei immediately picked me during auditions, and when I asked the man himself about it, he told me yeah, that’s how it went. That made me really happy; I treasure it even now.

Talking with Sensei was a lot of fun. All sorts of things pop up when you have a conversation with him. I’d like to cut open his head and check out his brain (laughs). I bet his brain’s totally different than yours or mine. It’s amazing that he could think up the world of Dragon Ball!

MC: What did you think about voicing three characters (Goku, Gohan, and Goten)?
It’s a new record! They’re all lead parts or semi-lead parts, so in the real world it’d be impossible.

When I read the script for the first episode with Gohan, at the spot where it said “Son Goku: Masako Nozawa” I thought that the “Masako Nozawa” was a bit misaligned, and that nobody’s name was written under “Gohan”. So I asked the staff about it, and the conversation went like this: “There’s a name written there!” “No there isn’t!” “See, right there!” “Huh, you mean me?” “Yes!” “Then you should have centered it better! It’s too close to Goku!” (laughs)

The producer (Kozo Morishita, currently chairmen of the board for Toei Animation) told me that Toriyama-sensei picked me for the role of Gohan as well. I’m really glad about that. And apparently it was the same with Goten. I wondered whether it was alright having me play so many roles, but I wouldn’t have gotten there without everyone’s support. I’m happy to have been given the opportunity to perform three different roles.

MC: The new TV series Dragon Ball Super starts in July! What’s your outlook for the future?
I don’t know what the story will be like, but with a name like “Super”, I bet it’ll be super fun, with super amazing battles. After all, 超 is normally read as “Chou”, but here it’s “Super” (laughs)! I’m holding out hope for the next movie too, maybe even before Toriyama-sensei is (laughs). Don’t just leave it at Goku, Gohan, and Goten; from here on out, please raise a bigger and bigger “Dragon Ball family”. 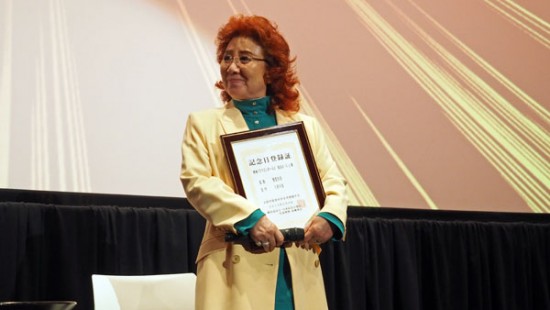 In conjunction with the celebratory day, the official Dragon Ball 30th anniversary website also unveiled a new logo. Not only will it be the website’s new logo, but it will be used on all upcoming memorial goods, including a new commemorative 30th anniversary book which will be previewed from time to time on the anniversary website. As of this post, no official release date has been set.

What will you do to celebrate Goku Day (not to mention Piccolo Day)? Let us know in the comments, or hit us up on the forums!