Here at Kanzenshuu, we have inadvertently produced a podcast mini-series on critical thinking over the years: back in 2013 with a supposed new series announcement, and again just recently with a supposed new movie announcement. In each case, we tracked information back to the original source, dissected various statements, provided independent translations, etc.

We of course realize and understand that not every fan is capable of doing research to this extent on their own, and we deeply appreciate that you turn to us for analysis and confirmations. That being said, there are steps that anyone can take to start the process on their own. The following example is a great case study, and we invite you to follow along for yet another primer in critical thinking with regard to Dragon Ball information that you may come across in the rustling grass of the wild Internet.

STEP 0: THE CLAIM
A statement in the Dragon Ball Super: Super Start Guide explains that Beerus is the first character in the series to exceed the speed of light.

STEP 1: THE SOURCE
A Google+ user named Wade “Zaddy” Strine made the following post on November 26 within the “Battle Kingdom” community:

Beerus Was the First Character In DBZ to be FTL

Some of you may know about the Dragon Ball Super Start Guide, but I am guessing you haven’t read it. The reason I am guessing that is because it is only in Japanese, and full copies are very hard to find. Well, I met up with a friend recently who I had not seen in a long time. He is one of the only Anime fans I know, and, as he is Filipino, he actually speaks fluent Japanese.

(The Guide, for those of you who don’t know)
http://dragonball.wikia.com/wiki/Dragon_Ball_Super_Start_Guide

So, he was showing me his collection, and this one stuck out because it was all Japanese. I was wandering what it was about, as I saw DBZ on the cover. Contrary to what a lot of you may believe, I AM a huge fan of the series, and I was also wearing a DBZ shirt at the time. Lol.

Well, he showed me it. He got it from this site, but they are currently out of print.

He was flipping through, showing me this different passages, and we came across one, towards the beginning of the book, detailing the arrival of Beerus.

Here is a scan I took using his printer. (I went ahead and underlined it on MS Paint so you guys could tell which part I was talking about.

The part translates directly to this, “The emergence of Beerus ! First character Z- fighters which can exceed the speed of light are met !”

That is really sloppy because of the translating, but what it is saying is “The arrival of Beerus! The first character the Z-Fighters have met who can exceed the speed of light!”

So, according to this databook, no character before Beerus’ arrival was FTL. Damn.

I am known as a down player, but even I wouldn’t go that far. Lol.

What do you guys think? Does this put a damper on the databooks’ reputation?﻿

An additional Google+ user linked to the article garnering responses of their own (with the post having since been removed), while users on social media began to approach Kanzenshuu and its administrators yesterday with the following image, asking for verification: 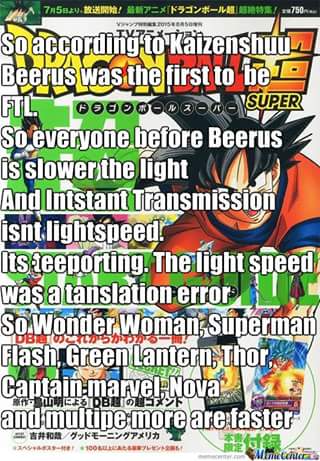 People making false claims may point to imaginary sources (such as the non-existent Akira Toriyama interview with “Nirazaki Tihashiberi” in the fabled “Super Otaku Magazine”, itself erroneously cited by “ryandbeast” within the post’s comments). Oftentimes these same types of people will name-drop legitimate sources to suggest the appearance of authority. In this case, Strine cited the Super Start Guide as his source. This citation works in his favor as being a legitimate magazine, but also one that was in short supply and has indeed since gone out-of-print. Those looking to independently confirm the information would either have to order a copy on the second-hand market, or find someone who had purchased it during its original release window.

STEP 4: CRITICAL THINKING
Truth be told, the Japanese production staff are even less interested in describing and confirming these “feats” than we at Kanzenshuu are in translating them (that is to say: not at all). Statements about power, speed, and strength in Japanese Dragon Ball guide books are traditionally vague and open to interpretation (simply toss the phrase “Daizenshuu says Goten = Gohan” at any given “versus debate” fan and see where you end up). It seems very unlikely that a promotional guide book — put out ahead of its respective TV series’ debut, and therefore ahead of the battles supposedly being described — would make such a claim. Additionally, the book has been released and in the wild for five months; any surprising or genuinely-new tidbits of information likely would have made their way out in that time.

Strine invokes the “appeal to / argument from authority” fallacy common to these claims: that he has a friend fluent in Japanese. Strine also claims the image to be a scan, though the text in the image is rather clearly just text typed directly into a computer and screen-capped: it is crisp, perfectly aligned, and the pixels are visible upon close inspection. It is of course possible to clean up a scan, but for it to appear so “perfect” in such a spot online is unlikely. People with questions about guide book information generally provide either a full-page scan, or the typical “potato quality” cell phone photo which also provides surrounding context (images, text, etc.) on the page.

The text splash on the subsequent image is riddled with typos: “Kaizenshuu”, “teeporting”, “tanslation”, etc. While various points are indeed accurate (瞬間移動 shunkan-idō, literally “instantaneous movement”, is the colloquial phrase for “teleportation”), the entire image comes across — and may have been intended — as a parody when viewed through a critical lens. The poor color choices and layout, typos, and comparisons to random American comic book characters should be enough to raise an eyebrow.

STEP 5: EXAMINE THE AGENDA
A cursory glance at some of Strine’s posts showcase active “versus debates” in both Google+ communities and abroad, all filled with sarcastic and dismissive comments… until this revelatory post of his own, which suddenly invites feedback and opinions after humbly admitting that, contrary to what his readers may think, he is indeed a fan of the series.

STEP 6: FULL ANALYSIS
The sentences that mention Beerus are not coherent Japanese; for example, instead of the relevant word for “character”, the post uses a term that means a letter in a word rather than an individual in a work of fiction. The sentence was, in all likelihood, constructed via Google Translate. Indeed, plugging in Strine’s own “translation” as the English text nets you the exact Japanese text purported to be from the book:

“Before I married my current husband, I used this out of interest [when I saw it] at a love hotel. It felt sooo good, I had it used on me every time I went to one. After 9 years of marriage, I was dissatisfied with My married life, which had started to be just going through the motions, but of course I couldn’t say that [to him]… [but then] I happened upon this by chance and quietly bought it. I use it in secret from my husband. BEERUS’ ARRIVAL! THE FIRST LETTER OF THE FULFILLED Z-FIGHTERS WHO COULD EXCEED THE SPEED OF LIGHT! I can’t come with my husband, but I do it right away with this. You might suppose that neither ‘low’ nor ‘high’ would do it for you, but ‘high’ is painful. I’m enjoying this nice and slow on ‘low’.”

CONCLUSION
We do not hold the exclusive rights to miscellaneous Dragon Ball information translations. It is entirely possible that someone else may get to something before us.

The intent here from Strine, however, was to deceive his readers and laugh at their expense from the very beginning. That his post would be used in a case study such as this one likely only fuels the flames of his personal enjoyment. His audience is minuscule and he serves to lose nothing (credibility, readership, etc.) by pulling such a stunt. If anything, our dedicating this amount of research and time only gives the trolls more reason to pull such stunts: they know the general “versus debate” audience will eat it up and come running to Kanzenshuu for confirmation (see: 1, 2, 3, 4), thereby taking valuable time away from more important/fulfilling work.

We love that our readers and fans have come to expect accuracy and reliability from us here at Kanzenshuu, and we of course encourage you to ask questions; rarely will we turn down an opportunity to learn something new or at least have a good laugh. That being said, the above outline should provide you with the tools and examples necessary to begin gauging information on your own before ever needing to hit that Japanese-to-English Kanzenshuu Panic Button™. The red flags are always there, and they are impossible to cover up by inexperienced trolls just trying to get some message board lulz. You have the tools! Use them well, save yourself some time, and save us some time in the process!