The first issue of Shueisha’s “Jump Ryū!” (ジャンプ流! / “Jump School!”) manga artist collection covering Akira Toriyama will be widely available across Japan this week (07 January 2016), and thus of course globally through numerous online retailers. Each issue of the “Jump Ryū!” collection will cover individual Weekly Shōnen Jump manga artists — as well as lessons on various manga drawing techniques — and comes packed with a DVD, a special booklet, and two exclusive replica prints (Toriyama’s is the only volume set to include three). The first volume will retail for ¥650 (~$5.50), with each subsequent volume retailing for ¥1,290 (~$10.90). The first three volumes of the collection previously received a release exclusively in the Shizuoka region of Japan on 03 September 2015 as a limited run.

Having purchased a copy of the limited release for ourselves, let’s take a look at what exactly comes packaged in this mook (“magazine book”)!

The first thing to note is that the contents of the two releases are identical, with the special booklet, DVD, and bonus material in the nationwide release all being exact reprints of those included in the limited release. The only obvious exception is the mook’s cover, which has been slightly redesigned and now features Super Saiyan Son Goku for the nationwide release.

Packaging
The main packaging is constructed with a small cardboard box, approximately 12 by 9.5 inches, or roughly the same size as the Dragon Ball Super: Super Start Guide, and not quite one inch thick. The front of the mook opens in a tri-fold fashion to reveal its contents. The special booklet is slipped into the left flap and the three exclusive replica prints are concealed within a tearaway pouch in the right flap. The slim DVD case is enclosed in the center of the box, and the box must be opened from the top in order to remove the DVD. 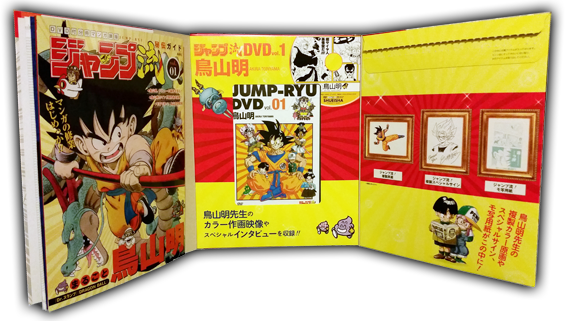 Special Booklet
The 18-page special booklet is the same size as the mook and shares the same cover illustration as the limited release mook. It is printed on high-quality paper with a gloss finish on the outside cover. The book’s contents are split up into four main sections, with the first three covering Akira Toriyama, along with two shorter columns and a letter of reflection from Toriyama at the end. 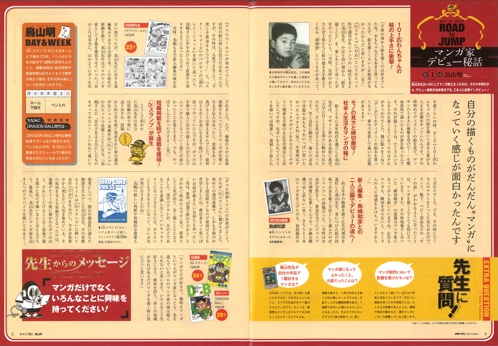 Jump Ryū! DVD
Packaged in a slim case, the DVD is Region 2 encoded and presented in 16:9 widescreen format. It contains four video features with a total running time of approximately 42 minutes. The DVD cover illustration was originally drawn by Akira Toriyama for the Akira Toriyama The World: Anime Special mook released in October 1990. 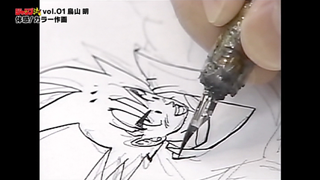 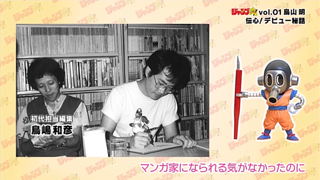 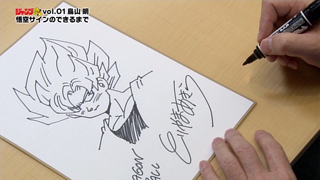 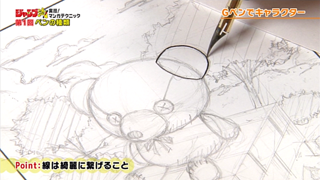 Printed Material
Included with the mook are printed replica copies of the two illustrations seen being drawn by Akira Toriyama on the DVD, in addition to the storyboard for the lesson featured in the special booklet. All three replicas are printed on A4-sized, high-quality grade paper.

Promotion
In addition to the normal adverts in Jump magazines, Shueisha recently advertised the “Jump Ryū!” lineup at Jump Festa ’16 with numerous flyers and large displays of the packaging. The lineup will include a total of 25 manga artists, with the first eight volumes currently set for release up through April 2016. They have also launched Twitter and Facebook pages, both of which are updated with sneak previews and numerous promotional goodies, as well as an official website. Most recently, Shueisha released a 15-second commercial promoting the first volume.

The nationwide release of the first “Jump Ryū!” volume focusing on Akira Toriyama is currently available on CDJapan and Amazon Japan.