On June 12, 2016, Dragon Ball Super shows a new storyline… With Goku and the gang having finished the tournament against Universe 6, Trunks returns from the future and appears before them.

It’s the start of the “‘Future’ Trunks Arc”, a new plot line with story and characters based an original draft by Akira Toriyama.

After he defeated Cell, Trunks’ future was supposed to be at peace, so why has he re-appeared in the present…?

What is this new enemy in the future…? 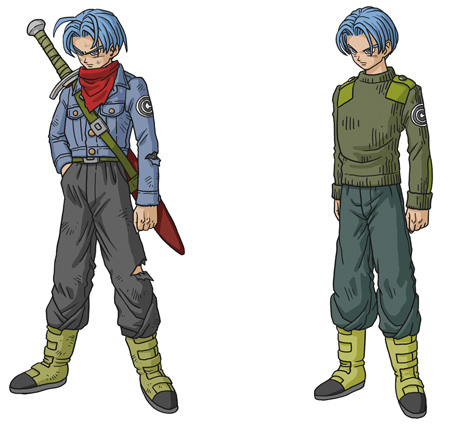 Accompanying the news and his character designs, Akira Toriyama also provided a new comment on the upcoming story arc: 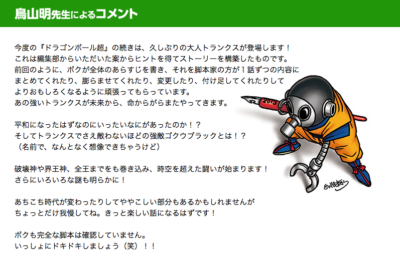 Next up in Dragon Ball Super, adult Trunks will be putting in his first appearance in a long time! I put together this story based on a suggestion from the editorial office. Like last time, I write an outline of the entire plot, then the script writers break it up into episodes, expanding on things, changing things around, or adding in new bits as need be.

Despite being so strong, Trunks barely escapes from the future with his life.

The future was supposed to be at peace, so what in the world could have happened!?

And what about this foe too strong even for Trunks to handle, Goku Black!? (Well, you can probably imagine what he’s like just based off the name)

It’s the start of a battle that surpasses time and space, and drags in the God of Destruction, Kaiōshin, even the Omni-King! Many mysteries will be revealed!

There’s some confusing bits with time changing here and there, but just bear with me. It should definitely turn out to be a fun story!

Even I haven’t checked the final script yet.

Let’s enjoy this together (laughs)!!

The 42nd episode of the Dragon Ball Super TV series (“A Tumultuous Victory Celebration! Facing Off At Last: Monaka vs Son Goku?!”) aired this weekend. The TV series airs Sunday mornings at 9:00 a.m. on Fuji TV in Japan.