The trailers also provide a look at the international “Hero Edition” available for pre-order (thus far only indicated as a physical edition on the Nintendo Switch), which will come packed with “11 early character card unlocks” as in-game downloadable content, along with five cards for the Dragon Ball Super Card Game. 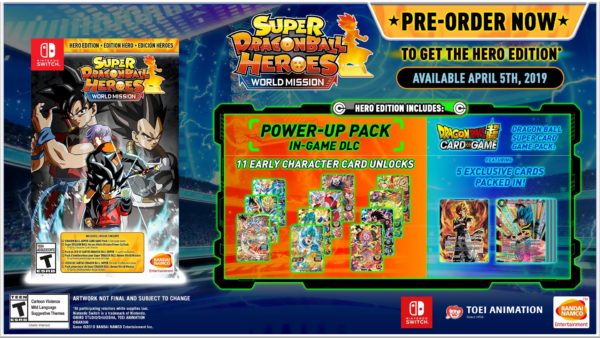 Super Dragon Ball Heroes: World Mission, developed by Dimps for Bandai Namco, is a home version of the ongoing Super Dragon Ball Heroes card-based arcade game in Japan. Due out 04 April 2019 in Japan and 05 April 2019 internationally, World Mission will see a release on the Nintendo Switch and PC (via Steam) covering the eight base “Super Dragon Ball Heroes” missions and first two “Universe Mission” series updates. The game is set to feature an original story with Shiirasu, an antagonist with the Galatic Patrol insignia who arrives at the Time Nest speaking of “justice” to Trunks and the Kaiōshin of Time. Designed by Toyotarō, the character’s official “English” name spelling has been revealed as “Sealas”; the name in Japanese is likely a play on whitebait, fitting alongside other, similar Galactic Patrol-related names.