Ahead of the character’s release tomorrow (26 September 2019), a short promotional video for Gogeta (SSGSS) has been released showcasing some of his special moves. The character will be available individually for ¥500/$5, or as part of the game’s optional $24.99 “FighterZ Pass 2” covering six total characters. 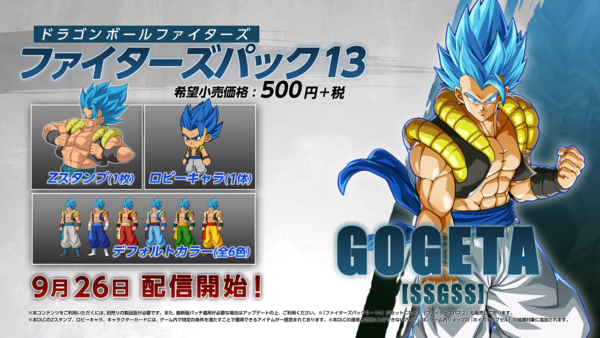 Gogeta, a fusion of Son Goku and Vegeta created from the fusion dance, debuted in 1995’s twelfth theatrical Dragon Ball Z film. The character was recently “rebooted” alongside other characters in the 2018 theatrical film Dragon Ball Super: Broly; this “Super Saiyan God Super Saiyan” (“SSGSS”) version serves as the basis for FighterZ‘s inclusion, with various nods — including a special dramatic finish — to his original 1995 incarnation.

Dragon Ball FighterZ was originally released 26 January 2018 in North America and Europe, and 01 February 2018 in Japan. Alongside its Japanese release, Bandai Namco announced that they had shipped two million copies of the game, making it the fastest-shipping game in the franchise’s history. The game also shipped on the Nintendo Switch back in September 2018.