Following last week’s seventeenth episode premiere, the official Super Dragon Ball Heroes website announced a December 2019 streaming timeframe for the forthcoming eighteenth episode of the Super Dragon Ball Heroes promotional anime, continuing further into the brand-new “Universal Conflict” arc. In the upcoming episode (“Super Decisive Battle! Gogeta vs. Hearts!”), the Earth trembles as the fate of the universe rests on the ultimate fused warrior in his battle against Hearts. 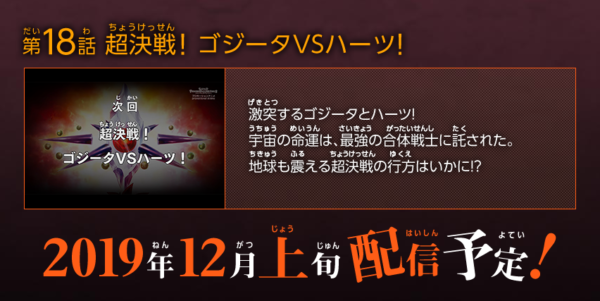 The self-described “promotional anime” began its free online streaming in July 2018, with the initial six episodes covering the “Prison Planet” arc, then moving on to the “Universal Conflict” arc. Though the series’ original trailer was available worldwide, the subsequent episode postings themselves have been region-locked to Japan. No home release of the promotional anime has been announced.