Viz’s ninth collected volume of the Dragon Ball Super manga is dated for 02 June 2020 at a $9.99 MSRP. A digital edition will also be available at various retailers, including Amazon, Comixology, and direct from Viz. 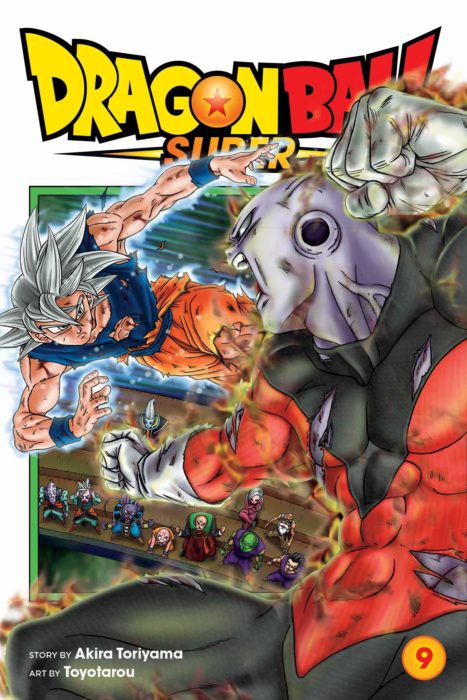 The Tournament of Power is nearing its end, and only a few warriors from Universe 7 remain to fight Universe 11’s Jiren. Goku struggles against Jiren’s endless onslaught of attacks, and things start to look grim. It seems like the only way Goku can defeat him is by tapping into the power of Ultra Instinct—something he’s never been able to do before! Will he be able to master it in time to defeat Jiren and save Universe 7?! Meanwhile, back on Earth, Boo is about to get Boo-napped!

The ninth collected edition will cover chapters 41-44 a la its Japanese counterpart.

The Dragon Ball Super “comicalization” began in June 2015, initially just ahead of the television series, and running both ahead and behind the series at various points. The manga runs monthly in Shueisha’s V-Jump magazine, with the series’ fifty-eighth chapter coming this week in the magazine’s May 2020 issue. Illustrated by “Toyotarō” (in all likelihood, a second pen-name used by Dragon Ball AF fan manga author and illustrator “Toyble”), the Dragon Ball Super manga covered the Battle of Gods re-telling, skipped the Resurrection ‘F’ re-telling, and “charged ahead” to the Champa arc, “speeding up the excitement of the TV anime even more”. Though the television series has completed its run, the manga continues onward, entering its own original “Galactic Patrol Prisoner” arc. Viz is currently releasing free digital chapters of the series, and began their own collected print edition back in 2017. The eighth collected volume was released earlier this month.