The interpretation of quality by its nature is subjective, and animation quality is no different. While there is no set defining characteristic to determine what is quality animation, whether it be good or bad, even the most casual of viewers can differentiate between the two with little thought. Being a visual medium, animation easily lends itself to this type of scrutiny and criticism, and Dragon Ball is no exception. It is no secret that the various animated Dragon Ball series produced by Toei Animation have all exhibited some degree of variability in animation quality at some point, although some instances are worse than others. This page includes multiple sections examining the various aspects that affect animation quality, as well as discussing the role of character designs and the use of the term “on-model”.

Character Designs and Being “On-Model”

As with most large animated productions, the animation for the Dragon Ball franchise is drawn by several animators, all with differing drawing characteristics, styles, and skills. To diffuse the influence of these differing styles on the overall look of the series, or even a specific episode, lead animators develop character design sheets for each character appearing in the series. These character designs are crucial in how a series’ characters are portrayed, as they help to standardize the appearance, poses, and gestures of the characters for the animators. Character design sheets will often provide supplemental notes with specific information to the animators on how to develop particular features of the character, such as the shape of their head, hair length and style, size and position of the eyes and the mouth, facial expressions, and even relative size of the character to other characters or objects. 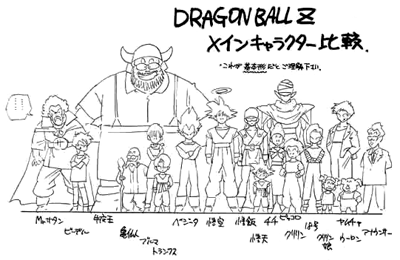 The lead animator responsible for developing these sheets is given the title of “Character Designer”. The majority of animated series have a single character designer at a time, although there are some that feature specialty character designers who are only responsible for designing specific character types, such as mecha or monsters. Toei Animation previously referred to this role as the “Chief Animator”, which was credited up through the first half of Dragon Ball Z, but was later changed to conform to the standard position titles established by the animation industry at the time. 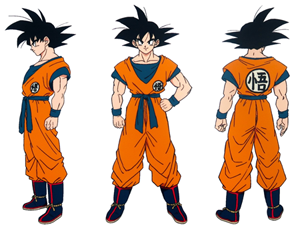 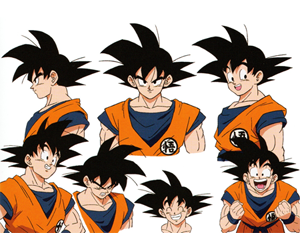 While the terms “on-model” and “off-model” are well defined, they are sometimes used liberally to refer to what is perceived as “bad animation”, which is not necessarily their intent. There are many different attributes that affect a viewer’s subjective determination of animation quality, and being off-model is only one of these aspects. In some instances characters are purposely drawn off-model for dramatic or emotional effect, exaggeration of a feature or motion, or even the illusion of weight. In other instances characters are simply off-model due to a lack of sufficient schedule, artistic skill, or a proper understanding of anatomy. It is in this case that off-model animation can become distractedly noticeable to the viewer. However, a scene or cut can be well animated, yet still not be completely true to the character designs.

One example of this in Dragon Ball is animation from Studio Cockpit, and more specifically the cuts and key frames drawn by one of the studio’s lead animators, Masa’aki Iwane. The scene presented below of Son Goku battling Majin Boo on Planet Kaiōshin was drawn by Masa’aki Iwane for Dragon Ball Z episode 279, with minor corrections from Studio Cockpit’s animation supervisor Keisuke Masunaga. This scene features many of the identifiable styles associated with Studio Cockpit, including motion smears, sharp angular faces, pronounced pointy noses, large pupils, and other overly exaggerated features.

This scene is generally regarded by fans as being well animated, largely because the character’s movements are smooth and dynamic, the adequate amount of follow-through provides a sense of impact, and the facial exaggerations appropriately convey the pain of a punch. It should be noted that this scene also benefits from an excellent storyboard by director Shigeyasu Yamauchi. However, there is still no denying that the characters as drawn by Masa’aki Iwane in this scene are off-model from the series’ established designs.

When comparing or discussing the animation of any series, it is important to differentiate between the use of key and in-between frames. As discussed in other sections of this guide, key frames are what ultimately establish each scene and the in-between frames are what provide the transitions between these key moments. Both are essential in the animation process, but with the wide availability of digital media and computer software it has become common practice for some to use awkward or unappealing in-between frames to cite or provide evidence of a specific episode having bad or poor animation quality. In reality, these in-between frames are only ever intended to provide transitions between key frames and assist in providing the illusion of motion to the viewer.

As an example of this, the screen shot below is of an in-between frame from Son Goku and Jiren’s hand-to-hand battle with key frames drawn by Naotoshi Shida for the 2nd Dragon Ball Super opening. In this in-between frame Goku’s face appears to be awkwardly drawn with the head placement appearing too far to the left. Despite this, when watching the scene in motion this exact frame is nearly impossible to pick out and does not detract from the impact of the scene. 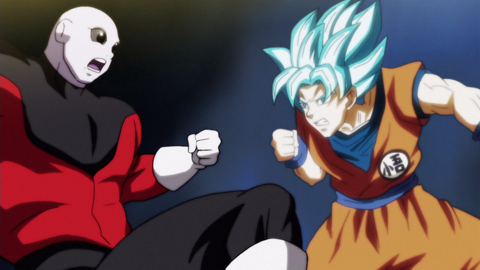 As with any visual medium, it is recommended that the animation be largely judged more-so in motion than with still images, such as screen shots.

There are numerous aspects that can affect the quality of animation, such as limited budget, a rushed production schedule, the use of multiple animators, and antiquated industry traditions, such as animator seniority. While most of the blame for poor animation quality is often given to a series’ lack of budget, the most significant factor is actually a series’ production schedule. Nothing, not even a large budget, can make up for a lack of production time.

In most cases a series’ budget provides the potential for a quality production, but does not actually dictate that it will be of high quality. As a quick analogy, imagine a restaurant owner gives a world-renowned chef an absurd budget to buy all the ingredients, utensils, or appliances they could possibly need to prepare a 5-star meal, but instead of having the hour needed to prepare such a meal the owner only gives the chef 5 minutes. The same concept applies to the animation industry. In order to meet an upcoming broadcast deadline, the typical amount of work required to produce an episode may have to be done in a shortened (and sometimes unrealistic) time frame, which often leads to using shortcuts to reduce the overall production time.

In some cases, a rushed production schedule is compensated for with the distribution of workload to more animators and implementing multiple levels of reviews and corrections. For instance, this was the case with Dragon Ball Super, where Toei Animation split episodes into multiple sections, each with its own animation supervisor, and further used 2nd key animators to refine the artwork prior to being corrected by the section’s animation supervisor or by the episode’s chief animation supervisor. In this situation, corrections are heavily relied upon in order for animators to produce cuts as quickly as possible. So while these quality control measures can often improve the overall quality of an episode, they too become ineffective if not enough time is available for supervisors to provide the necessary corrections. The following scene from Dragon Ball Super provides a good example of this: 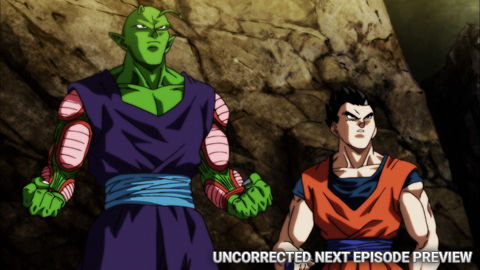 In the above example, an uncorrected version of the scene with Gohan and Piccolo appeared in the next episode preview for episode 106. However, this respective scene in the episode’s actual broadcast features corrections from chief animation supervisor Miyako Tsuji to bring it more in-line with the established character designs. It is evident that in situations where a rushed schedule does not provide sufficient time for these corrections that an episode can easily deviate from the desired quality, especially when the quality control measures rely so heavily on the corrections process. So while the budget itself does matter, it is not the be-all and end-all in determining animation quality. Budget is the potential, but to fulfill such potential, sufficient time is necessary.