At New York Comic-Con 2012 back in October, Viz Media noted plans to release new “3-in-1 omnibus editions” of the Dragon Ball manga starting in June 2013, but no further details were available. At the time, this re-release sounded confusing due to the “Viz Big” edition of the manga — also 3-in-1 volumes printed on higher-quality paper and with most of its respective color chapters intact — still being readily available at retailers.

Just this month, the special Shonen Jump Alpha Yearbook 2013 contained a “Creator Spotlight” on Akira Toriyama. The spotlight (image courtesy of our forum user the original ero-sennin) promoted a “new 3-in-1 edition” of the Dragon Ball manga planned for release beginning Summer 2013, which lined up with the Comic-Con announcement. 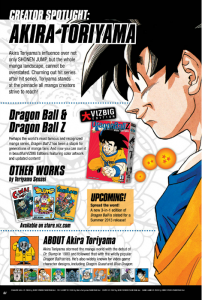 Viz had released specially-branded “3-in-1” versions of certain series before, combining volumes together into one book on lower-quality paper than their standard “Graphic Novel” paper, though printed at the same size (roughly 5 x 7.5 inches — for comparison’s sake, the “Viz Big” versions of Dragon Ball are roughly 8.6 x 5.8 inches). Both One Piece and Bleach — neither of which had previously received a “Viz Big” version — had seen these repackagings trickle out. One Piece in particular never made it past the East Blue arc, ending its fourth “3-in-1” with volumes 10, 11, and 12 together in one book back in May 2010. That is set to change next month with a new “3-in-1” picking up with the Baroque Works arc and volumes 13, 14, and 15.