Hot on the heels of the Kenshin and Ichigo reveals this past month, next week’s issue of Weekly Shōnen Jump in Japan (WJ #31, due out 01 July 2013) is set to announce the inclusion of two more characters for the upcoming “team battle action” game J-Stars Victory Vs on the PlayStation 3 and Vita: Kankichi Ryōtsu (Kochikame) and Sakata Gintoki (Gintama), making up the “city-slicker contingent”.

Ryō-san will fight with a bazooka, and can also sneak up and snipe with a rifle. In one screenshot featured in the magazine, the hapless policeman can be seen frantically pedaling away from a Kamehameha on his faithful bicycle, Chidori. As his finishing move, Ryō-san can bring lightning down upon his station chief opponents, as just one of the various patterns for the characters.

Gintoki, while also including quite a bit of gag-elements (including a scooter), does get serious when the time comes, and as the “White Demon”, he is described as being quite incredible.

The short feature also explains a bit about finishing techniques as well as special character actions; for example, Luffy stretches and Goku transforms.

Ryō-san has popped up in various Dragon Ball-related works over the years, and should be a hysterical inclusion alongside the rest of the cast. The two franchises’ most recent crossover with each other took place back in 2006 to celebrate the 30th anniversary of Kochikame, with Akira Toriyama contributing to a Chō-Kochikame chapter featuring the bumbling police officer’s attempts to take control of the parking situation on Planet Namek. We covered two Dragon Ball and Kochikame crossovers back on Episode #0302 of our podcast last year, so check it out for more information!

Gintama regularly makes Dragon Ball jokes and parodies, with the Gintaman opening animation spoof on “CHA-LA HEAD-CHA-LA” certainly being one of the best. 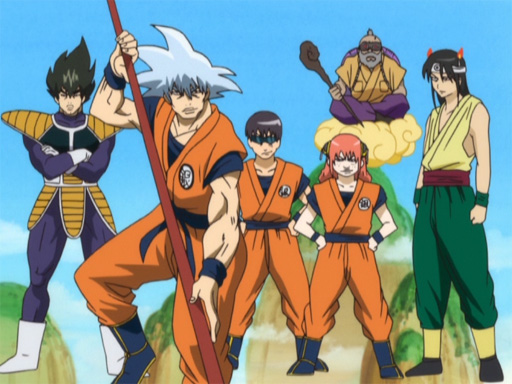 Celebrating the 45th anniversary of Jump, the game will launch for the PlayStation 3 and Vita, though a release date has not yet been set, and there is also no word on any kind of international release. Son Goku (Dragon Ball), Monkey D. Luffy (One Piece), and Toriko (Toriko) were the first three characters teased for what was originally known as Project Versus J, with Naruto being announced alongside the formal name change.