New updates finally reveal not only the b-side for the “Kuu-Zen-Zetsu-Go” CD single, but also the extra bonus features on the “Limited Edition” version! 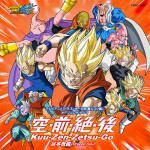 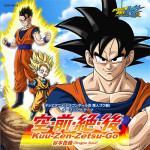 The b-side is entitled “You Too Must Have Flown in Your Dreams Before” (キミも夢で飛んだことがあるだろう Kimi mo yume de tonda koto ga aru darō), and will also be performed by the group “Dragon Soul” (comprised of Takayoshi Tanimoto and Takafumi Iwasaki). Karaoke versions of both songs will also be completed for four total tracks.

Perhaps most exciting is the “Limited Edition” version’s DVD content, which will include all sorts of Dragon Ball Heroes material such as opening animations and theme songs from the arcade game:

The most recent DVD release to heavily feature any Dragon Ball Heroes promotional animation was 2011’s “Special Selection DVD” with the Bardock and Trunks TV specials.