FUNimation has announced that their home video release for the film Dragon Ball Z: Battle of Gods will drop 07 October 2014 in North America on DVD and Blu-ray. 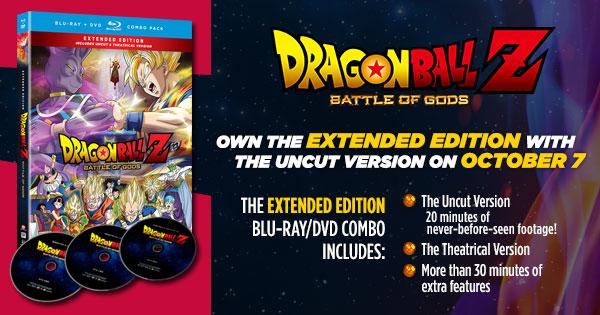 As hinted at by Manga UK’s previously-announced release (set for November 10th), the release will feature both the original theatrical version of the film along with the extended edition aired on Fuji TV earlier this year.

The extended version of the film is not available on home video in Japan.

Fans of the series have a lot in store for them with this home video release. The Dragon Ball Z: Battle of Gods Extended Edition on Blu-ray/DVD Combo Pack comes with two versions of the film: the Uncut Version – which includes an additional 20 minutes of never-before-seen footage – and the Theatrical Version. It also includes over 30 minutes of extra features, including an in-the-booth featurette with the fan favorite cast.