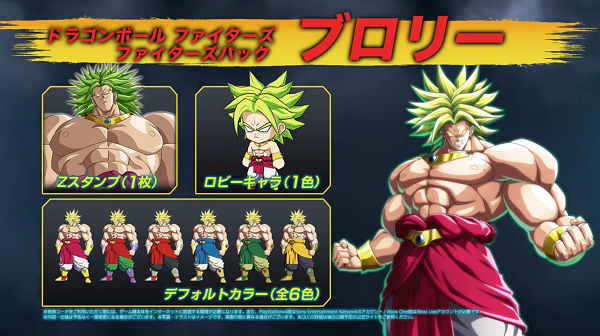 Broli — a creation of film scriptwriter Takao Koyama — debuted in the eighth Dragon Ball Z film in March 1993. He would return for two additional films: the tenth movie in March 1994 and the eleventh movie (as a cloned “Bio”-version) in July 1994. In terms of video game appearances, Broli debuted as a secret playable character in 1993’s Super Butōden 2 on the Super Famicom, and has subsequently appeared in numerous games since then as both a standard character and hidden boss.

The game’s optional $34.99 “FighterZ Pass” covers eight additional playable characters over the game’s base roster; Bardock and Broli are the first of these eight. As of yet, no concrete release date has been announced for either of these characters.

The 3-on-3, “2.5D” fighting game is developed by Arc System Works for the PlayStation 4, Xbox One, and PC (via Steam). The game runs at a 1080p resolution and 60fps frame rate, with higher resolutions available on the PlayStation 4 Pro and Xbox One X consoles, as well as the PC. Playable characters include Son Goku, Son Gohan (Cell arc design), Vegeta, Freeza, Cell, Boo (Good), Trunks, Piccolo, Kuririn, #16, #18 (with #17), Yamcha, Tenshinhan (with Chiaotzu), Ginyu (with teammates), Nappa (with Saibaimen), Gotenks, Son Gohan (Boo arc design), Boo (Pure), Hit, Beerus, and Goku Black (with Zamasu), as well as “Super Saiyan God Super Saiyan” (SSGSS, or “Super Saiyan Blue”) versions of Goku and Vegeta that can be accessed early via pre-orders or unlocked through gameplay. The Akira Toriyama-designed “#21” has also been revealed as a new character central to the game’s story mode. Upcoming paid DLC characters are set to include Broly and Bardock, along with at least six other characters.

Dragon Ball FighterZ was released 26 January 2018 in North America and Europe, and 01 February 2018 in Japan.

Alongside its Japanese release, Bandai Namco announced that they had shipped two million copies of the game, making it the fastest-shipping game in the franchise’s history.

Arc previously worked on Dragon Ball Z: Extreme Butōden for the Nintendo 3DS, as well as the Super Sonic Warriors games (Bukū Tōgeki and Bukū Ressen) on the Nintendo Game Boy Advance and Nintendo DS. The developer is otherwise known for their Guilty Gear and BlazBlue series of fighting games.