In conjunction with today’s July 2018 issue of Shueisha’s V-Jump magazine in Japan, Bandai Namco has announced a forthcoming Super Dragon Ball Heroes animation project. The project is described as a “promotion(al) anime” focused on the Prison Planet arc from the arcade game’s current/ongoing “Universe Mission” series of updates (not to be confused with the Dragon Ball Super series’ “Universe Survival arc”). 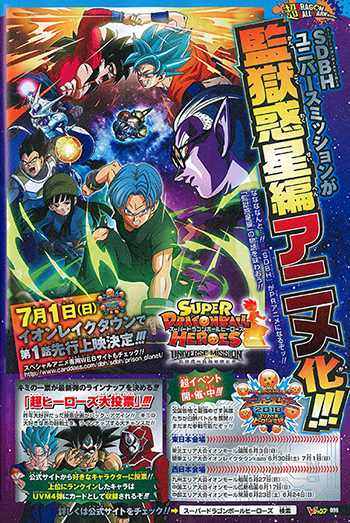 An official mini-site has also opened at www.carddass.com/dbh/sdbh/prison_planet/. 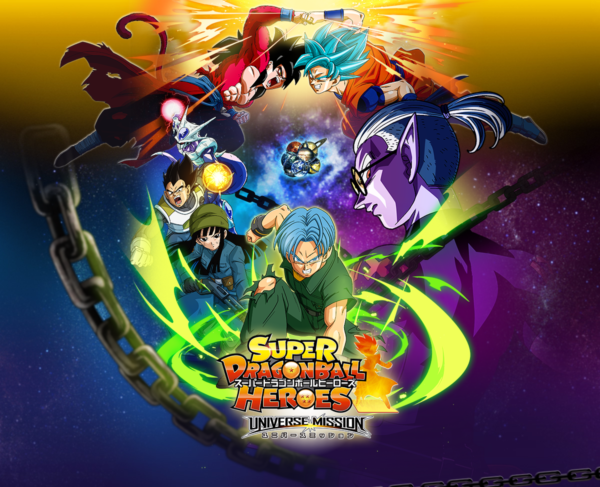 In addition to providing a brief overview of the arcade game itself, the new website details the new Prison Planet story:

Trunks returns from the future to train with Goku and Vegeta. However, he abruptly vanishes. The mystery man “Fu” suddenly appears, telling them that Trunks has been locked up on the “Prison Planet”, a mysterious facility in an unknown location between universes. The group searches for the Dragon Balls to free Trunks, but an unending super battle awaits them! Will Goku and the others manage to rescue Trunks and escape the Prison Planet…?

The V-Jump promotion notes that “episode one” will receive a preliminary screening 01 July 2018 at Aeon LakeTown in Koshigaya, Saitama Prefecture, while the official website simply states that the first episode will begin its “distribution” that same date; nothing is stated regarding any kind of digital distribution or broadcast method.