The official Dragon Ball website’s eighty-fifth entry in “The Nearly Complete Works of Akira Toriyama” — an on-going series highlighting rare and important pieces of the author’s work over the years — is a series of character designs from the first Nintendo Famicom game, Shenron no Nazo (“The Mystery of Shenlong”), as originally shared in Bird Land Press 22 in December 1986: 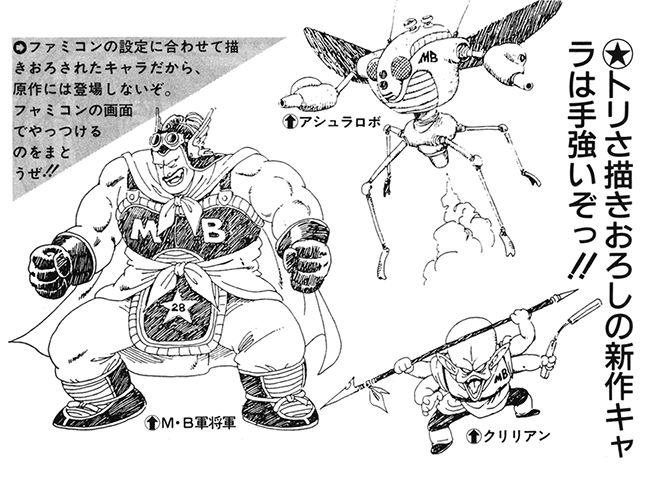 The characters seen here, all in the employ of the game’s antagonists, the “MB Army”, are “Kurilien” (an alien that resembles Kuririn), an “Asura Robot”, and the MB Army General.

The game eventually received a North American release, with substantial modifications, as Dragon Power for the Nintendo Entertainment System. Goku was changed to a generic martial-arts protagonist, Nora’s (née Bulma’s) panties were changed to “sandwiches”, and nearly all overt references to Dragon Ball proper were papered over.