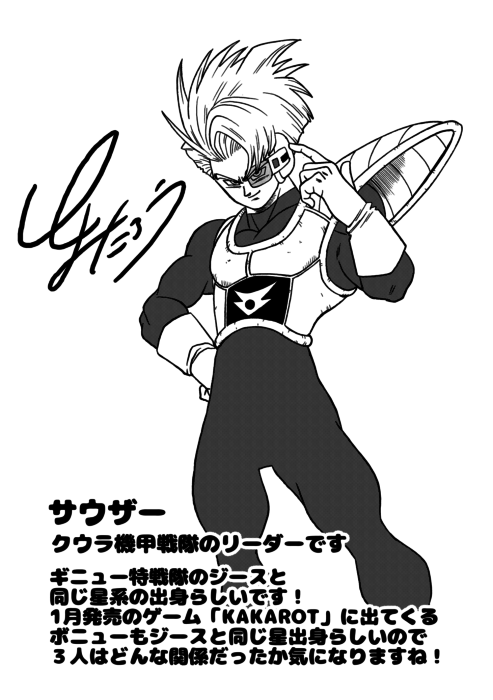 He’s the leader of the Coola Armored Squadron.

Apparently he’s from the same solar system as Jheese from the Ginyu Special Force!

I hear that Bonyu, who appears in the game Kakarot coming out this January, is also from Jheese’s system, which gets you wondering what kind of relationship the three of them might have had!

Thouser originally appeared as one of Coola’s henchmen in the fifth theatrical Dragon Ball Z film from 1991, performed by Shō Hayami (also having played Zarbon in the television series). With the shift to Hiroaki Miura for Zarbon since Dragon Ball Kai, Thouser remains Hayami’s sole (very occasional) Dragon Ball voice role. Thouser has appeared as a playable character in various video games over the years, including Dragon Ball Z: Sparking! NEO and Dragon Ball: Raging Blast 2.

The tidbit of Thouser hailing from the same solar system as Jheese comes from the special “Attention!! A Super Announcement of 3 Great Jump Anime!!” column in the 1991 No. 25 issue of Weekly Shōnen Jump, released that May, promoting upcoming films. The fifth Dragon Ball Z theatrical film screened alongside two other movies from the Magical Taluluto and Dragon Quest series that July.