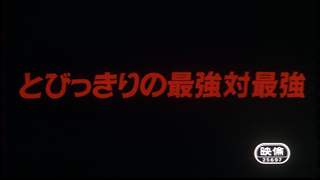 The Incredible Strongest vs Strongest

The movie premiered as part of the 1991 Summer “Toei Anime Fair” (東映アニメフェア; Tōei Anime Fea) on 20 July 1991, along with two other movies from the Magical Taluluto and Dragon Quest series. The event originated from the “Toei Manga Festival” that was established by Toei in 1969 as a way to showcase their popular children’s series as theatrical films during seasonal breaks in the school year. In Japan, almost all schools below the university level run a three-term school year (trimester system) with a vacation period of several weeks to a month at the end of each trimester: spring vacation, summer vacation, and winter vacation. The movies were screened together back-to-back in various cities across Japan, with a typical total running time of roughly three hours. Most festivals would last roughly one month, or as long as the seasonal vacation allowed. Tickets could be purchased at the theater, or discount tickets could be purchased in advance which covered the cost of admission, as well as a bonus item such as a promotional pamphlet describing the featured movies, and various other special presents, such as posters, paper hats, cards, and toys. Additional items, including the official theatrical pamphlet and a variety of other commemorative goods, were available for purchase at cinemas or by mail during this period.

Off in the depths of space Coola watches on as his brother, Freeza, destroys the Planet Vegeta, along with the entire Saiyan race. However, Coola’s henchmen notice a Saiyan space pod with a baby has escaped, but Coola doesn’t feel it’s necessary to pick up his brother’s messes. Years later, Coola learns of his brothers demise at the hands of a Saiyan from Earth and orders his henchmen to track him down.

Back on Earth, Goku, Gohan, Kuririn, and Oolong venture out into the wilderness on a camping trip, when they unexpectedly feel an abnormal presence nearby. The Coola Armored Squad suddenly appears at the camp site and easily downs Gohan and Kuririn. Goku, who had been off catching dinner, quickly returns to help them, but is too late. He challenges the armored squad and is holding his own against the three of them, but takes an attack head-on from Coola in order to protect Gohan. Goku’s body limply falls from sky into the nearby waterfall, but Coola knows that he isn’t dead and quickly orders his men to find him immediately.

Goku and the others find themselves hiding out in a nearby cave trying to treat Goku’s wounds, but they are quite severe. Gohan sees an opening and decides to head to Karin Tower on Hire Dragon to get some senzu in order to heal his father. However he is spotted by the armored squad on his way back and is in dire straits when Piccolo arrives on the scene. Piccolo’s power quickly overwhelms Dore and Neiz, and he is handily beating Sauzer until Coola shows up to challenge the Namekian. Meanwhile, Gohan manages to make it back to the cave, but unbeknownst to him he has been followed by Sauzer, who burns the senzu. Luckily Gohan manages to feed Goku the last remaining senzu.

After a short barrage of attacks, Sauzer decides it’s time to finish off Gohan and Kuririn, when his scouter suddenly detects a rapidly rising power. The senzu has revived Goku, who becomes extremely angry at seeing his friends attacked, and he quickly blows away Sauzer with merely his aura. Goku and Coola begin their one-on-one battle, and at first it appears Goku has the upper hand, until Coola decides it’s time to transform into his final form. Coola’s increased power pushes Goku’s limits up against the wall, when a golden aura surrounds him… He has finally transformed into a Super Saiyan! Goku quickly begins to overwhelm Coola, who is amazed by his awesome power.

In a last ditch effort Coola fires a gigantic energy blast at Goku, but Goku forces it back at him, knocking him into the sun. Everything seems to have returned to normal, when Sauzer suddenly appears before our bewilder heroes. All seems hopeless, but out of nowhere a Makankōsappō suddenly hits Sauzer, putting him down for good. Gohan looks around to see who it was, but no one is there. Once again, peaceful times have returned to the Earth.

The following original character profiles were translated from Daizenshuu 6, along with exclusive supplemental information published in Weekly Shōnen Jump 1991 #25. Additional character design comments from the movie’s character designer, Minoru Maeda, have also been included as published in the “Design Lab” section of the “Dragon Box The Movies” Dragon Book.

“The Incredible Strongest vs Strongest”

« Previous Movie
Movie Guide
Next Movie »
Connect With Us
Support Us
Your support for Kanzenshuu is what keeps us going. You can help by donating to us directly, or by shopping online at certain retailers through our affiliate links below. Every bit counts and helps contribute to our server fees and bringing you new site content, reviews, and contest items.