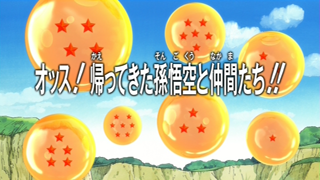 In honor of Weekly Jump’s 40th anniversary, Shueisha’s annual Jump Festa hosted a tour to 10 cities across Japan entitled the “Jump Super Anime Tour ~The Jump Heroes Great-Gathering~”. The tour screened seven newly-animated specials or shorts from popular series serialized in various Jump anthologies, one of which was Dragon Ball. In fact, of all the anime series based on a manga, Dragon Ball was the only one that was not currently running in a Jump anthology.

To attend the “Jump Super Anime Tour”, you had to send in an application form printed in Weekly Shōnen Jump, selecting which city (shown below) you would like to attend the tour. Once all of the applications were submitted, a certain number for each city were drawn at random, and those chosen were sent tickets to attend the screening. Following the completion of the tour, Jump streamed three of the specials online for a limited time, free of charge, on their Jumpland website. Not only that, but it was streamed with subtitles in a few languages, such as English, German, and French.

It has been two years since Majin Boo was defeated and Satan has become a hero for defeating him. However, Videl remembers the truth of those events, and seems to be embarrassed about her father. A gigantic hotel is being built in Satan’s honor. Upon completion, Satan decides to throw a party for Goku and the others who fought with him. Meanwhile, Goku, Chi-Chi, Gohan, and Goten have been making their living growing radishes. Videl talks to Gohan over the Internet and asks him to bring his family to the party. At first Goku does not want to go, but he changes his mind once he hears there will be rare foods there.

Kame-Sen’nin, No. 18, Kuririn, etc., all take off for the hotel and give Goku’s family a lift. Piccolo decides to not ride along, but rather flies after them on his own. The group from Capsule Corp. arrives at the hotel first, and when Vegeta and Goku see each other, they begin to fight. Goku realizes the party is starting, and heads off to the assembly hall. Apart from Goku’s family, Vegeta’s family, and Kame-Sen’nin’s group, the crowd includes Dende, Mister Popo, Karin, Yajirobe, Yamcha, Oolong, Gyūmaō, Kaiō, Bubbles, Gregory, Kibito-shin, and Elder Kaiōshin.

Despite the fact that there is supposed to be no media coverage of the party, members of the press appear and ask Satan questions about Boo’s defeat. While the “Z Warriors” are eating, two Saiyan style spaceships land on Earth. Piccolo and Gohan are the first to notice, then No. 18, and eventually everyone stops eating and the atmosphere becomes tense.

A sharp-eyed Saiyan and a small alien emerge from the two spaceships. Using his scouter to detect higher battle powers, the Saiyan soon arrives at the party. Upon seeing Vegeta, the Saiyan calls him “big brother”. The “Z Warriors” are all shocked by this sudden event. The Saiyan introduces himself as Tarble, along with his wife, Gure. Vegeta says that Tarble had been sent off to a remote planet because he had no talent for battle. Tarble begs our heroes to defeat Avo and Cado, who have ravished his planet and pursued him to Earth.

Goku says that if they are strong, he will fight them, and Gohan wants to help as well. Goten and Trunks think it sounds interesting, Kuririn and Yamcha say they want to try as well, and eventually even Kame-Sen’nin wants to fight. Tarble measures Goku’s battle power with his scouter, and says he will be of no help since his battle power is so low. Vegeta scolds Tarble for relying on his scouter, and as an example, Goku begins to gather ki. The battle power reading on the scouter steadily increases. It soon breaks as Goku goes Super Saiyan and then Super Saiyan 2, and Tarble is amazed by Goku’s power. Goku thinks it will be unfair if everybody fights this weaker enemy, and suggests they select a single representative to fight.

Goku teleports Gohan, Goten, Trunks, Piccolo, Yamcha, Kuririn, Kame-Sen’nin, Videl, Chi-Chi, Bulma, Tarble, and Gure to Mount Paozu (this whole time, Satan, Fat Boo, Kibito-shin, and Elder Kaiōshin have been ignoring Tarble and just go on drinking). Goku suggests that they each draw a radish, and the person who draws the longest radish will be the representative. Goten draws out a very long radish, and it seems he will be the one to fight. This makes Vegeta jealous, and he tells Trunks to pull out an even bigger radish. Pressured by Vegeta, Trunks pulls out a very thin but incredibly long radish, and becomes the representative.

Meanwhile, two other spaceships land on Earth, containing Avo and Cado. Pursuing Tarble, they arrive at Satan Hotel, and a panic erupts. Goku and the others soon return, and things calm down. It turns out Avo and Cado are remnants of Freeza’s army, who have taken control of Freeza’s planets now that he is gone. Vegeta also knows of them, and says that they were supposed to rival the Ginyu Special-Squad. Tarble says that the two have become much stronger, and that not even Freeza could beat them now.

Goku loses his enthusiasm when he hears that they are “only” at Freeza’s level, and decides that it is alright for Trunks to fight them. With some difficulty, he gets Vegeta’s permission to let Goten fight as well. At first Avo and Cado underestimate their child opponents, and they get clobbered and knocked into some boulders. They decide to get serious, and they each split into three people.

Cornered, Avo and Cado merge to become even stronger, forming merged Aka. Put on the defensive by Aka’s attacks, Goten and Trunks use their secret weapon, Fusion. However, since it has been so long since they have used it, they fail and become fat Gotenks. They eventually succeed on their second try, and Gotenks overwhelms Aka, using Yamcha’s Rōga Fū-Fū Ken, Tenshinhan’s Haikyū-ken, and to finish him off they use Satan’s “Miracle Special Ultra Super Megaton Punch”, going Super Saiyan the moment they punch Aka. Aka crashes into a lake and it looks like the fight is over, but…

Aka rises out of the lake and is enraged. He lets out a Wahaha no Ha (“Wahaha Wave”), firing it from both hands and his mouth. It hits Gotenks and causes the Satan Hotel to collapse. Aka then starts shooting energy bullets, damaging each part of the hotel one after the other.

In order to protect his friends, Piccolo deflects an energy bullet with a Makankōsappō. Kuririn uses a Kienzan to save No. 18 and Marron as they are about to be crushed by rubble. Yamcha protects Bulma from the falling rubble by using the Sokidan, Yajirobe saves some people by slicing rubble in half, and Kame-Sen’nin also protects a couple of beautiful women from the rubble.

Goku and Vegeta decide to finish off Aka. They contest over which one of them will defeat him, when Goku points and asks “What’s that?!”, causing Vegeta to look away. With Vegeta distracted, Goku takes off towards Aka, while Vegeta objects that that was a dirty trick by Goku. Aka fires a Super Wahaha no Ha and Goku counters with a Kamehameha, then nails Aka with a punch with all his heart and soul behind it.

Aka is finally defeated and the battle is over. Videl tells her father that having his hotel smashed was a punishment from God, but brightens his spirits by saying she will help rebuild it. Goku also encourages him, saying that it can be rebuilt, and the party starts again amid the hotel rubble. As the party continues, Goku eats Vegeta’s sushi, who eats Goku’s Char Siu in return. Angry, the two finally turn Super Saiyan and begin fighting, as everyone else watches in amazement.

All credits listed below are as originally presented in the feature.