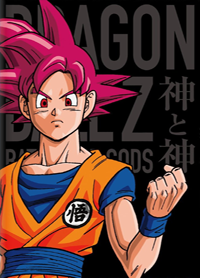 The special limited edition home video release of Dragon Ball Z: Battle of Gods is available in both DVD and Blu-ray formats, with each containing a disc for the main title (DVD or Blu-ray) and a special bonus disc (DVD only). Both releases are physically identical and come packaged in a specially designed box made of durable cardboard with a mat black finish. The front of the box features a clear plastic window to showcase the included Super Saiyan God wall figure. A promotional image of Shenlong graces the side of the box and wraps over onto the front. Both sides of the box feature a gold foil version of the film’s title, while the top of the box features the film’s official logo. The back of the box features Son Goku in his Super Saiyan God form. All packaging illustrations were drawn by the film’s chief animation supervisor Tadayoshi Yamamuro. 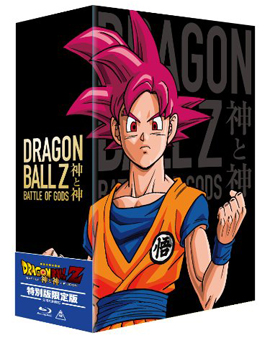 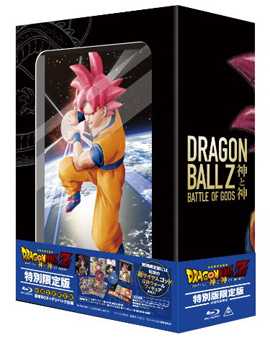 The front of the disc book features the film’s promotional poster illustration, with the Pilaf Gang climbing over the film’s main logo on the back. The book is made of a thicker cardboard with a gloss finish on the outside. Inside the book is a hard clear plastic to hold the discs, beneath which are monochrome screen shots taken from the film. Behind each disc is a colored screen shot corresponding to the characters featured on the disc’s label. 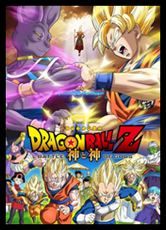 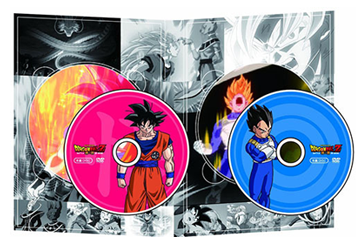 The main title disc features an illustration of Son Goku placed over the 悟 (go) character, which is prominently featured in the series on the back of Goku’s dōgi. The bonus disc label features Vegeta, which has been placed over the Capsule Corp. logo. Both illustrations were used in the film’s promotional campaign.

Every theatrical trailer and promotional TV spot (12 in total) for the film have been included on the main title disc as part of a special “Announcement Collection”. A static collection of design materials is also included, which features 35 character designs from chief animation supervisor Tadayoshi Yamamuro. Some characters have multiple sheets of designs or facial expressions presented, but the majority of every major credited character in the film has been included.

Included on the bonus disc is the “Jump Super Anime Tour 2008” special, which was previously only available as a limited mail-in order through various Shueisha anthologies. Only the full-length feature is included, with the non-credit ending omitted. The first “Battle of Gods”-related bonus included is the live “open recording” session held on 28 January 2013 in Tokyo with special voice guests Shōko Nakagawa and Kaori Matsumoto, along with appearances by Masako Nozawa and Son Goku. Follow that are interviews with four of the film’s voice actors — Masako Nozawa (Son Goku, Son Gohan, and Son Goten), Kōichi Yamadera (Beerus), Shōko Nakagawa (Oracle Fish), and Kaori Matsumoto (Motorcycle Police Officer) — in which they discuss their enjoyment of working on the film.

The final two bonus videos included are special screening events held in honor of “Battle of Gods”. The first event was an early screening held simultaneously on 12 March 2013 in five major cities across Japan, with the limited number of attendees determined by a lottery selection. As a special treat to those attending the Tokyo screening, Masako Nozawa and special voice guests Shōko Nakagawa and Kaori Matsumoto made an appearance to provide fans with a special introductory greeting message, and perform a group Kamehameha together. The second event was held on 30 March 2013 at the Marunouchi Toei Theater in Tokyo in honor of the film’s premiere. Various cast and staff members were on hand to greet the audience prior to the premiere, including Masako Nozawa (Son Goku), Kōichi Yamadera (Beerus), Masaharu Satō (Kame-Sen’nin), Ryō Horikawa (Vegeta), Toshio Furukawa (Piccolo), Shōko Nakagawa (Oracle Fish), and the film’s director Masahiro Hosoda.

Following the production company animation, the disc opens to the main menu, which is simply the film’s cover illustration. There are five menu options presented, including “Play Main Title”, “Chapter List”, “Subtitle Selection”, “Announcement Collection”, and “Setting Materials Collection”. All menus are silent and static. 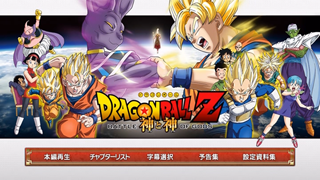 The “Play Main Title” selection plays the entire feature length film, while the “Chapter List” divides the film into 15 chapters, with the 15th being the film’s closing credits. The next selection allows the viewer to turn the Japanese subtitles on or off, which are intended for those with hearing impairment. The final two menu selections take the viewer to the appropriate bonus material sections.

Each sub-menu of the DVD release features various backgrounds taken from the film, while unfortunately all of the menus on the Blu-ray release utilize the same static illustration as the main menu.

The bonus DVD disc is identical for both releases and contains a silent and static menu. There are no sub-menus, as each bonus feature has its own menu selection. 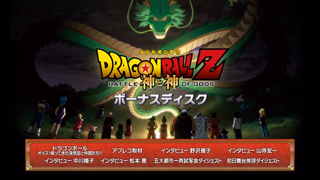 The special booklet is 20 pages in length and is closest in size to the JIS B6 format (12.8 × 18.2 cm). The entire booklet is printed in full color on thick high quality paper. Unlike traditional Japanese books, the booklet is written from left to right. The front and back covers of the booklet feature promotional illustrations from Tadayoshi Yamamuro. 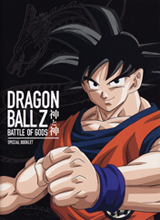 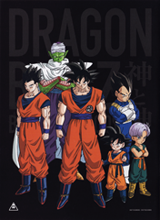 Teaser Poster: Rough Sketch
001
The booklet opens with a short introduction about the Dragon Ball franchise and “Battle of Gods”. Following that is a rough sketch of one of the film’s first teaser posters and the booklet’s front cover drawn by Tadayoshi Yamamuro.
Message From Akira Toriyama (read translation)
002
Although Akira Toriyama had written numerous messages for various publications leading up to the premiere of “Battle of Gods”, this message is exclusive to the “Limited Edition” DVD and Blu-ray releases.
Story
004
The story section of the booklet is a near identical reprint of the story section on the movie’s official website with additional screen shots.
Character
006
This section provides brief character biographies, including some character designs for Son Goku, Beerus, Whis, and the Oracle Fish.
Check Point
008
A quick assortment of highlights from various aspects of the film, such as the inclusion of nostalgic characters, Beerus “the cat” and Whis “the good-looking”, Vegeta’s angered surge of strength, the legendary power of the Super Saiyan (listing out each state’s approximate battle power), and Vegeta’s bingo dance scene.
Super Saiyan God
010
Accompanied by screen shots of Son Goku in his new Super Saiyan God form, this section details the origin of “Super Saiyan God” and its inclusion in the film. It also describes the process in which five Saiyans hand-in-hand can transform another Saiyan into the God of Saiyans.
Stage
012
A collection of the different locations seen throughout the film, such as Beerus’ Palace, Kaiō’s Planet, Capsule Corporation, and the Bingo Hall.
Special Disc
014
This section breaks down the “Jump Super Anime Tour 2008” special, which is included on the bonus disc. It includes a brief story synopsis, original character biographies, lists the main story points, and compares some of the similarities between the special and “Battle of Gods”.
Character Correlation Diagram
016
A correlation chart that lists many of the characters, both heroes and enemies, that appear in the “Jump Super Anime Tour 2008” special and “Battle of Gods” film.
Dragon Ball History
018
A timeline of the Dragon World from Age 749 to 784, showing where the events of the “Jump Super Anime Tour 2008” special and “Battle of Gods” film fit in.
Movie History
019
A colorful gallery of movie posters from the entire Dragon Ball franchise, including the year of their original premiere. The section ends with the ambiguous phrase, “and more…”
Teaser Poster: Rough Sketch
020
The booklet closes with another rough sketch of the film’s second teaser poster and the booklet’s back cover drawn by Tadayoshi Yamamuro. Following that is a main staff list for both “Battle of Gods” and “Heya! Son Goku and Friends Return!!”, in addition a production staff list for the DVD and Blu-ray releases.

Included as a special present in the “Limited Edition” release was an exclusive three-dimensional (3D) figure of Super Saiyan God set in a frame. It is intended to mimic a standard photo or portrait one might hang at home, but with the main focal point being visible in 3D. The frame is made of a black hard plastic and includes a stand inset into the back of the frame, allowing it to either be hung from the wall or placed on a shelf. 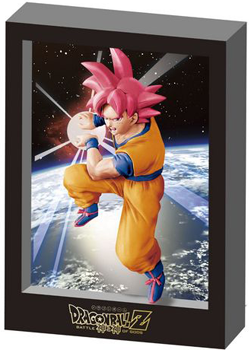 In addition to the 3D wall figure, a set of 18 postcards featuring the theatrical posters of each of the franchise’s films was also included as a special present. As a neat little trick, an image of Shenlong is formed on the back of the postcards when they are placed face down in order. 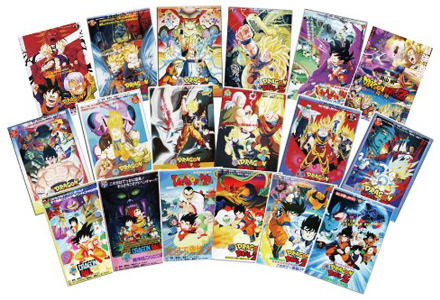