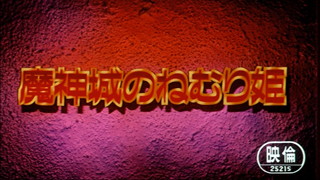 The Sleeping Princess in Devil’s Castle

The movie premiered as part of the Summer 1987 “Toei Cartoon Festival” (東映まんがまつり; Tōei Manga Matsuri) on 18 July 1987, along with three other movies from the Saint Seiya, Hikari Sentai Maskman, and Chōjinki Metalder series. The “Toei Cartoon Festival” was established by Toei in 1969 as a way to showcase their popular children’s series as theatrical films during seasonal breaks in the school year: spring vacation, summer vacation, and winter vacation. In Japan, almost all schools below the university level run a three-term school year (trimester system) with a vacation period of several weeks to a month at the end of each trimester. The movies were screened together back-to-back in various cities across Japan, with a typical total running time of roughly three hours. Most festivals would last roughly one month, or as long as the seasonal vacation allowed. Tickets could be purchased at the theater, or discount tickets could be purchased in advance which covered the cost of admission, as well as a bonus item such as a promotional pamphlet describing the featured movies, and various other special presents, such as posters, paper hats, cards, and toys. Additional items, including the official theatrical pamphlet and a variety of other commemorative goods, were available for purchase at cinemas or by mail during this period.

Goku heads to Kame House to train with Kame-Sen’nin, but when he arrives, Kame-Sen’nin is “busy”. Goku shouts in his ear, and finally gets his attention. Shortly after, Kuririn arrives on the island and requests that Kame-Sen’nin take him on as a student, as well. After some bribing, Kame-Sen’nin says he will accept one of them as a student, but only whichever one returns with the “Sleeping Princess”.

The boys set off toward Devil Castle, where the “Sleeping Princess” is said to be. Meanwhile, Bulma and the others tail Goku, but as they approach Devil Castle, they are attacked, and Bulma is kidnapped. After losing consciousness, Bulma wakes up in a lavish room. The owner of the castle, Lucifer, introduces himself and treats Bulma as an honored guest.

Lunch, a violent, blonde thief, rides into the room and quickly snatches the jewel from Goku. Goku gives chase, but after obtaining the jewel, he is forced to hand it over to Lucifer in exchange for Kuririn, who has been captured. Everyone is rounded up and encased in a wall of rock. Lucifer plans to use the jewel to power a beam cannon that he will use to destroy the sun. The “Sleeping Princess” is finally awakened with the light of the full moon, but this also triggers Goku’s transformation into a giant ape.

As Goku rampages through the castle, Pu’er eventually manages to cut off his tail, returning him to normal. Goku then takes on Lucifer and fires a Kamehameha at the beam cannon, destroying it. As it explodes, the out-of-control energy from the “Sleeping Princess” engulfs Lucifer, killing him. Everyone escapes, and the two boys return to Kame House with Lunch, who has transformed into a docile, dark-haired form. Kame-Sen’nin then accepts them both as his students. Kame-Sen’nin takes Lunch inside the house, but she suddenly sneezes and transforms back into her blonde form, riddling our heroes with bullets.

“I’ll Give You Romance”