While Dragon Ball Super‘s manga-exclusive “Galactic Patrol Prisoner Arc” is still ongoing (beginning back in chapter 42 in the January 2019 issue of Shueisha’s V-Jump magazine, and continuing today in chapter 61), the fight has been brought to Earth, and the Galactic Patrol — beyond just Jaco himself, now — has seen a great deal of what Earthlings are capable of.

The Galactic Patrol has seemingly had several reports on Earth throughout the years, but did you know that this pre-dates Dragon Ball Super, and even Jaco the Galactic Patrolman? Let’s go all the way back to the beginning!

Sachie-chan GOOD!!, originally published in the May 2008 issue of Shueisha’s Jump SQ magazine, is a one-shot manga that serves as the proper debut work in the Galactic Patrol series by Akira Toriyama and Masakazu Katsura. In the brief story, a young girl with a poop-shaped birthmark is visited by aliens who have come looking for strong martial artists; they hope to use these champions to drive away invaders, as the Galactic Patrol has not yet arrived to save them. By the end of the one-shot, the Galactic Patrol does ultimately arrive… to find that the Earthlings Sachie and Zalid have already taken out the evil Mil Gang on Planet Octo. The two humans are subsequently awarded with Galactic Patrol medals, with the added note that this is the first time Earthlings have received such an honor.

Jiya, once again produced by Toriyama and Katsura, is the second entry in the Galactic Patrol series, originally running in Shueisha’s Weekly Young Jump magazine between late-2009 and early-2010. In the three-chapter series, Galactic Patrolman Jiya arrives on Earth in search of his missing colleague Stece and with a burning desire to get to the bottom of an apparent cover-up… but quickly finds himself fighting against alien interloper Vampa and his army of giant fleas.

A significantly larger amount of Galactic Patrol lore is dropped here in Jiya, including the existence of the Galactic King, as well as our main subject of discussion: a formal Galactic Patrol report on Earth.

A giant asteroid is currently en route to the Planet Earth, and will impact in one year’s time. One hundred days ago, Galactic Patrolman Stece was sent to investigate, but his report back to the Galactic Patrol stated that everything from the environment to humanity themselves were not worth saving; Stece’s communication cut off after that point. 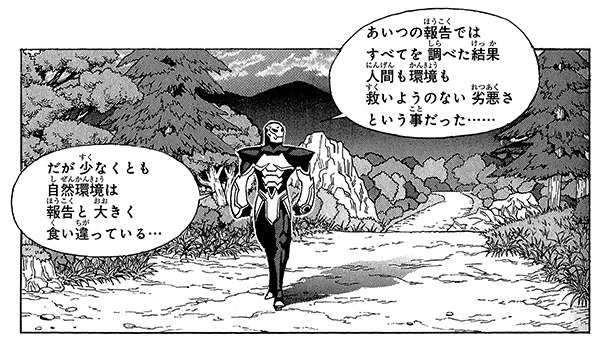 Determined to learn the truth for himself, the titular Jiya arrives on Earth and is surprised to see beautiful, flowing water and other natural resources, which runs contrary to Stece’s report. Furthermore, what Jiya observes is actually in line with “old documents” that he has been privy to. (Said documents also happen to state that Earthlings are split into “male” and “female”, and that the breasts of the “females” expand as they age…) 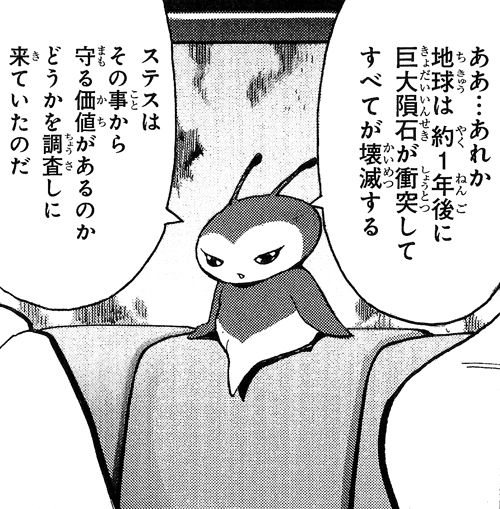 Following the defeat of Stece, Jiya vows to properly report back to the Galactic King that the Earth and its inhabitants are, in fact, worth saving.

(Quick note: some of this information will be a little bit “out of order” from its original serialization, as the “Dragon Ball Minus” bonus chapter from 2014’s collected edition of the series actually takes place before the standard chapters.)

A projectile from Planet Vegeta has launched in the direction of Planet Earth, so the Galactic King calls for Galactic Patrolman Jaco Tilimentempibosshi to head there and intervene, as it is a planet ruled by a weak and immature race. They believe the Saiyans have sent a child, which should be enough for a klutz highly-skilled member of the Galactic Patrol such as Jaco to handle. Jaco has also checked the data on Earth himself, which says it is home to sinister people. The Galactic King grants Jaco permission to exterminate them with an extinction bomb pending his own official investigation (after all, it would be better to save the planet’s environment and resources by destroying the human race, rather than having it all be wiped out in a battle between Earthlings and the alien threat). 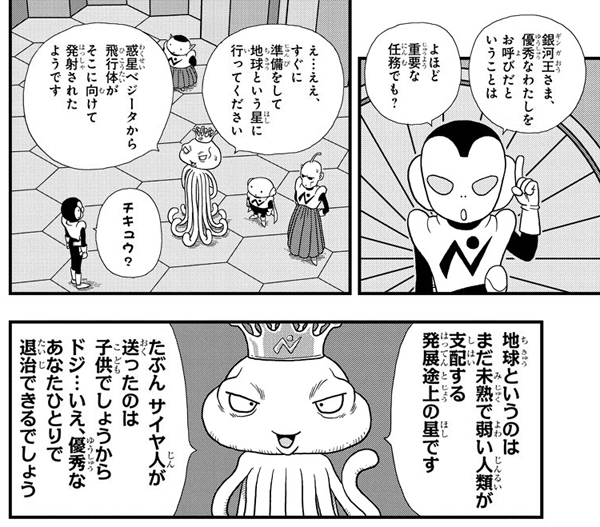 When Jaco arrives on Earth, he encounters a bitter old man named Ōmori Tokunoshin, and initially determines that humans are indeed worthless creatures not worth saving. 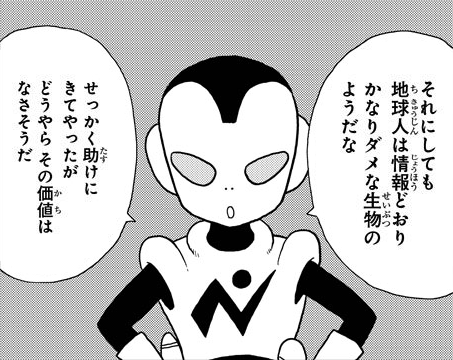 After getting to know Ōmori and befriending a young lady named Tights, Jaco comes around on humanity, decides not to use his extinction bomb, and instead decides save them from the invading Saiyan child; even if it is an immature race, there are some good Earthlings, too!

Due to a distraction with Tights, Jaco misses the space pod’s arrival… ironically enough saving the planet by not taking out the invader, a young Saiyan child named “Kakarrot”.

In Dragon Ball Super chapter 52, the Macareni Gang make their way to Earth in search of more blue aurum. After initially escaping Piccolo with some sweet-talking, the gang send word back to Moro and his forces about Planet Earth. Though they are captured once more, the secret is out, and a battle is inevitable. Moro demands that stronger henchmen are sent to investigate, and he may just come devour the planet himself.

The following chapter sees the henchmen group of Seven-Three, Yunba, and Shimorekka receive the mission to investigate Earth. Seven-Three identifies it as “Planet-4032 Green-877”, the third planet from its star in the outskirts of the northern galaxy; incidentally, this is the same descriptor given to the planet by Whis when discovered the few remaining Saiyans on Earth in the 2013 theatrical film Dragon Ball Z: Battle of Gods). According to the data Seven-Three has, which is admittedly old and from before they were captured by the Galactic Patrol, it is a planet still in the developmental stage and of little value. 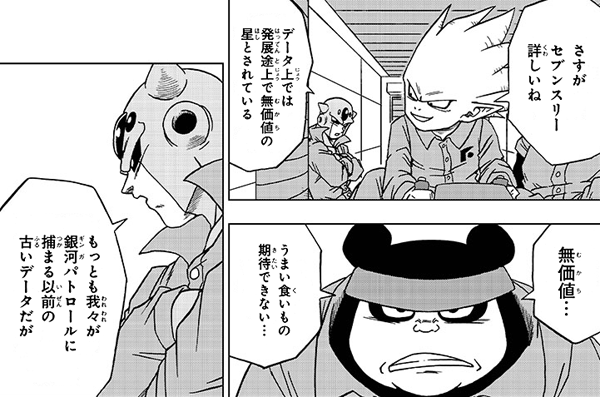 As of Dragon Ball Super chapter 56, a large-scale Galactic Patrol force is on Earth and engaged with Moro’s forces alongside Earth’s own heroes; there should be little confusion on the state of Planet Earth, at this point!

Prior to the reveal of Merusu’s true identity in Dragon Ball Super chapter 55, many fans wondered why it is that Merusu has never shown up to protect Earth from its various villains and invasions. It is simply the case that Earth is in one of three sectors under Jaco’s jurisdiction, not Merusu’s; as the number-one super-elite at the Galactic Patrol, he is responsible for and busy with 104 of his own sectors! Furthermore, according to everything the Galactic Patrol seemingly has on file, Earth is not a particularly important planet worthy of any special attention. 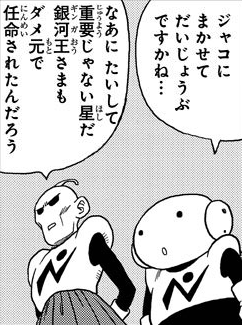 (Indeed, Merusu did come to Earth to help under the guise of a Galactic Patrolman… when it finally affected the universe as a whole! As of this article’s publication, it also remains to be seen that Merusu may do in the near future…)

In many ways, Stece’s falsified report on Earth lines up exactly with what the Galactic King says to Jaco in “Dragon Ball Minus”: humans are probably not worth saving, but go ahead and investigate for yourself. Furthermore, this also lines up with what Seven-Three knows about Earth in Dragon Ball Super, even going so far as to specifically note that it is an older report from before they were arrested by the Galactic Patrol, and may be out of date. Seven-Three’s intel may literally be Stece’s falsified report back to the Galactic Patrol.

While Stece’s report itself can line up with the later admittedly-“wrong” information, two key points get in the way of everything fitting together:

Perhaps Jiya simply did not arrive back at Galactic Patrol headquarters to inform the Galactic King of the truth on Earth before Jaco is sent to investigate. Jaco states that his spaceship can make two round-trips between Earth and headquarters on a full charge; independent of the length of the trip back, perhaps Jiya’s ship is also low and needs to refuel somewhere. Perhaps Jiya never made it back. There have indeed been openings in the Galactic Patrol force; when Jaco applied, the Galactic Patrol was recruiting five new members, and nine applied in total. Was one of these openings a replacement for Jiya, in addition to Stece?

That said, one would naturally assume that the Galactic Patrol report on Earth would be significantly updated following at least the events of Jaco the Galactic Patrolman (if not also the Resurrection ‘F’ arc and Universe 6 vs. 7 Tournament, the latter-most of which even the Galactic King himself attended!). And yet, if Jaco’s reaction to the Namekian race being saved is even remotely representative of other Galactic Patrol intel, it seems that it does indeed take years upon years for their formal documentation to catch up with reality! 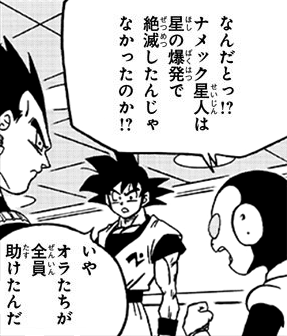 The “asteroid” versus “space pod” distinction is another difference that can not be truly reconciled, however; it seems strange that the Galactic Patrol’s advanced technology would not be able to tell the difference between a giant asteroid and a small space pod holding a single baby.

The simple truth of the matter is that Jaco the Galactic Patrolman effectively serves as a soft reboot for the entire Galactic Patrol saga, and the previous story bits just do not happen in the same way in Dragon Ball‘s continuity as they did in their original works, if at all. That being said, Seven-Three’s old intel is a clear nod to at least the information on Earth seen in “Dragon Ball Minus”, if not also stretching back to Jiya itself. While it is currently impossible to know which specific story beats and minor character chatter come directly from Toyotarō or Toriyama, sprinkling little lore touches like these are one of Toyotarō’s defining traits, and are reminiscent of his penchant for dropping various cameo appearances all throughout Dragon Ball Heroes: Victory Mission (which literally kicks off its debut chapter with a Dub & Peter 1 cameo).