The warrior race of the Saiyans, under the evil emperor Freeza, fight day and night to obtain many planets through force.

Bardock and another unidentified Saiyan destroy aliens on another planet. They suddenly receive a report on their scouters that all Saiyans have been ordered to return to Planet Vegeta. Bardock has misgivings about this and his partner questions it as well, badmouthing Freeza. Bardock tells him to take off his scouter or they will hear him. The two see Freeza’s ship hovering over the planet, and Bardock thinks they must have a hidden agenda.

They land at a settlement with crude houses and many other space pods. Another Saiyan greets Bardock, but he does not know what the order is about either. However, he has heard that Freeza’s forces heard about the “Super Saiyan” and that word of it is has been going around.

On his ship, Freeza mulls over this “Super Saiyan” and “Super Saiyan God” business. His attendant tries to reassure him that it is just a common heroic legend; Freeza says he knows this, but he must not even have a sliver of a doubt. Either way, the Saiyans are too proud and will never be his obedient dogs. It is a good time to destroy the entire planet. His attendant thinks it is a shame since they are excellent fighters. Freeza scoffs, then asks how much of the Saiyan race has arrived back. It will apparently take one more month for nearly all of the Saiyans to arrive, so Freeza decides to destroy the planet in one month’s time. If he is suspected by the remaining ones, he will just say that a giant meteor collided with the planet.

On another planet, Raditz asks Prince Vegeta if they should be getting back home. Vegeta says to leave it be; they will just pretend they did not hear the order.

Back on Planet Vegeta, Bardock makes his way along the settlement as the narration box explains there are only a few thousand Saiyans. As a warrior race, it would be difficult to increase their numbers (presumably, though left unsaid, because they would war with each other). Setting foot in one structure, Bardock greets Gine, who embraces him. She tells Bardock that Raditz is already a fighter, and is working with Prince Vegeta. Since they are far away, though, they have not returned yet.

Bardock asks if Kakarrot is still in the incubator. He is, but it has been three years, so she will take him out soon. Kakarrot has gotten big, and looks just like his father. Bardock looks long and hard at his son, then tells Gine he will steal a space pod tonight. They will send Kakarrot to another planet. Gine questions Bardock, who reassures her that it is for Kakarrot’s sake. Freeza seems to be planning something; he has a premonition of death. Even so, Gine says it is not like a Saiyan to worry about his children. Bardock shoots back that her “softness” disease spread to him, too.

Bardock shoulders the pod with a crying Kakarrot as they take it to the launch site. Gine suggests they all run away, but Bardock says it is no use since they would immediately be found with scouters. Gine nervously says to her son that if his father is just overthinking this, they will come for him right away. Bardock warns Kakarrot not to look for too long at the full moon; they will tell Raditz about this, too.

“You absolutely have to stay alive… See you around.”

Kakarrot presses his face against the glass as his pod rises up. Bardock says to watch out for the Galactic Patrol as the pod shoots off the planet. Bardock puts his arm around Gine as Kakarrot’s pod disappears into the sky.

Meanwhile, at Galactic Patrol headquarters, Jaco inquires why the Galactic King has summoned his exceptional self. It must be for an extremely important mission! The king goes along with this and tells Jaco to go to “Earth” since a flying object was picked up launching from Planet Vegeta and headed there.

Earth is a developing world ruled by humans who are still immature and weak, so the Saiyans have probably sent a child. Therefore the clumsy– er, exceptional Jaco can probably exterminate it himself.

After researching Earth, Jaco comments that Earthlings are of very poor qualities; if he decides it is not worth protecting them, he will use his extinction bomb. His superiors do not mind, but tell him to research well before doing it. He should arrive a few days before the Saiyan. Jaco is excited about the prospect of extinction, while one Galactic Patrolman asks whether it was all right to let Jaco handle such a task. The other tells him Earth is not an important world; the Galactic King gave him the mission figuring they had nothing to lose.

And so, Jaco, and later the Saiyan child called Son Goku, went to Earth. Some time later, Planet Vegeta, together with many Saiyans, was obliterated by Freeza’s hand. Eventually, the destined child grew up right and would, without realizing it, come to face off against his bitter enemy, Freeza… 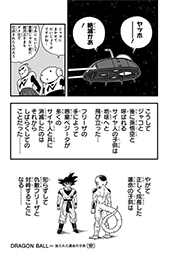 « Previous Chapter
Jaco the Galactic Patrolman
Connect With Us
Support Us
Your support for Kanzenshuu is what keeps us going. You can help by donating to us directly, or by shopping online at certain retailers through our affiliate links below. Every bit counts and helps contribute to our server fees and bringing you new site content, reviews, and contest items.