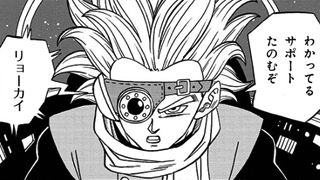 All seems at peace across the Universe following Moro’s defeat, with Goku and co. receiving medals of honor from the Galactic King to commemorate their heroic battle with Moro. As time passes by, Jaco is performing his important “Cyber Patrol” duties, but is convinced by another to assist in rounds at the Galactic Prison. While doing so, they encounter Saganbo’s henchmen, and after some provocation Jaco realizes he should have further investigated to ensure Seven-Three was indeed destroyed along with Moro. To clear his conscious, they travel back to Earth only to find the crater is empty. Thinking Seven-Three was certainly destroyed, they fly off to gather some delicious food; however, just prior to their arrival Seven-Three had been recovered by others.

A few months later, far off in a remote area of the universe, an attendant informs his master Goichi that the data from Seven-Three has been copied into their other units, meaning all should hold his same abilities. Goichi is ecstatic to hear this, considering all seemed lost after Seven-Three was stolen from them by Saganbo. Suddenly their ship is boarded by the mysterious Granolla, who quickly dispatches the guards and OG units sent to stop him. As he makes his way through the ship, Granolla finally stumbles onto what he has been searching for — OG73-i!

NOTE: The Granolla the Survivor arc technically begins with the final pages of chapter 67.

Dragon Ball Super Chapter 74Pages: 45
ベジータＶＳグラノラ
Bejīta Bui Esu Guranora
Vegeta vs Granolla
«
Manga Guide / Dragon Ball Super Manga
»
Connect With Us
Support Us
Your support for Kanzenshuu is what keeps us going. You can help by donating to us directly, or by shopping online at certain retailers through our affiliate links below. Every bit counts and helps contribute to our server fees and bringing you new site content, reviews, and contest items.