Following this week’s fifth episode premiere, the official Super Dragon Ball Heroes website announced a title and summary for the upcoming sixth episode of the Super Dragon Ball Heroes promotional anime‘s new “Universe Creation Arc” (under the larger umbrella of the game’s current “Big Bang Mission” update series). Similar to the last few episodes, no debut streaming timeframe is listed for the upcoming episode, though the website states that new episodes should be expected on a monthly basis.

Dragon Fist Explode! Super Full Power Saiyan 4: Limit Break!
In the midst of the fierce battle with Janenba, Demon Gods Salsa and Putine from the Dark Demon Realm suddenly appear. At their advice, Goku and the others all together lend their power to Son Goku: Xeno and Vegeta: Xeno. A red light scatters from the bodies of the two Xeno warriors, and they are bathed in an aura of a different color from before… Just how will the fierce fight with the mighty foe Janenba play out?! 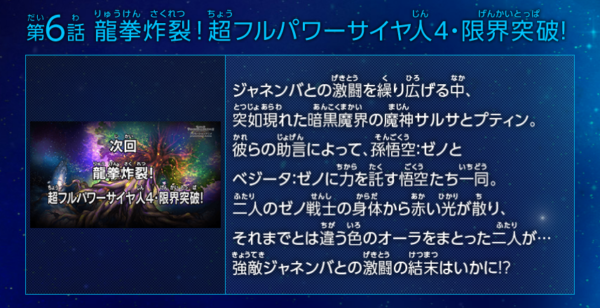