Volume 2 of Dark Demon Realm Mission! — released back in May 2018 — wrapped up everything available at that time, running through the series’ overall eleventh chapter from the March 2018 issue of Saikyō Jump. The series returned for “part two” in the May 2019 issue of the magazine, running (alongside Universe Mission!!) through the magazine’s March 2020 issue (released last month). Volume 3 should pick back up with the twelfth overall chapter from the May 2019 issue of Saikyō Jump, likely running through to its seventeenth chapter.

Both series — each recently running about 30 pages in length — came to an end last month in the March 2020 issue of Saikyō Jump, followed by an announcement that Nagayama will take up the reins on a new Super Dragon Ball Heroes: Big Bang Mission manga series in their place. 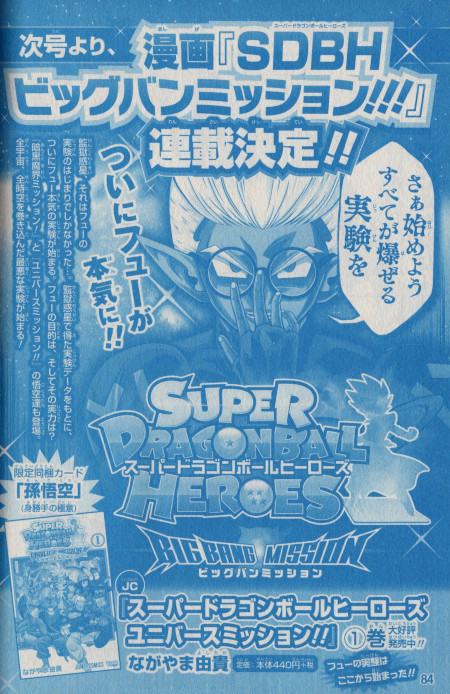 Yoshitaka Nagayama debuted in a supplemental booklet packed in with the December 2013 issue of Saikyō Jump, with Dragon Ball Heroes: Rookie Charisma Mission Episode 0 depicting the daily life and “training” of Engineer Yoshito and new Battle Navigators Tsubasa and Momo-chan in a cartoony style. The series eventually received its own standard serialization in Saikyō Jump beginning in the July 2014 issue, followed by Dark Demon Realm Mission! beginning in the September 2016 issue, Universe Mission beginning in the May 2018 issue, and now Big Bang Mission beginning next month.