New York Comic Con kicked off this morning in New York City, with the first panel on the main stage at 12:30pm EDT going to the upcoming Dragon Ball Super: Super Hero movie slated for release in Japan sometime in 2022. The live panel was hosted by Justin Rojas, who was joined by English voice actors Ian Sinclair (Whis) and Monica Rial (Bulma). The Japanese staff, including Toei Animation producer Norihiro Hayashida and Shueisha executive producer Akio Iyoku, had originally planned to attend in person, but for unspecified reasons instead joined the panel via live stream from Toei Animation Studios in Tokyo, Japan (local time 1:30am). They were also joined by panel host Sascha and translator Kyle Carr, who relayed information from the producers to the audience.

After some brief introductions, the producers quickly began sharing new content, including character designs for Dende, Bulma, and Karin. According to Akio Iyoku, some time has passed so Dende has grown a bit, and Akira Toriyama has given Bulma yet another new hair style. He also notes that he specifically requested Toriyama provide the animation staff with an updated character design for Karin.

The panel went on to debut an exclusive trailer filled with clips of finished scenes from the movie, with the hosts noting fans should pay particular attention to many of the new characters introduced. It is worth pointing out that each clip in this trailer utilizes CG rendered character models, as well as a combination of 2D and 3D backgrounds. So far every indication leans toward this movie being produced almost exclusively with CG, a drastic departure from the updated animation style utilized in the previous movie, 2018’s theatrical film Dragon Ball Super: Broly.

While the general plot is still unknown, the trailer does provide some hints as to who a primary antagonist may be: namely, the Red Ribbon Army. While the producers only hint at this possibility, it is quite obvious in the trailer (and later confirmed in the panel). The producers do also note that both Pan and Piccolo will play significant roles in the new movie, with Piccolo not only training Pan, but also being a grandfatherly figure. Akio Iyoku further provides the names of the two new characters that debuted at the pre-recorded Comic-Con@Home panel in August: “Gamma 1 (ガンマ1号)” and “Gamma 2 (ガンマ2号)”. Akio Iyoku notes that they put a lot of effort in getting the numbering on their chests just right, and in particular for Gamma 2, who has what appears to be a Red Ribbon Army patch on his left arm in the trailer. Also, as spotted by many out there with a keen eye for detail, a quick glimpse of Broli appears while fighting Goku on what we can only speculate is Beerus’s Planet.

The panel then played two quick pre-recorded Q&As with Toshio Furukawa (Piccolo) and Masako Nozawa (Son Goku), both of whom noted the Japanese cast had just finished recording. Conversely, after the two videos finished, Monica Rial noted that the Funimation cast has yet to start dubbing the movie. In his video, Furukawa notes that he is excited that the movie contains a healthy balance of drama and battle, while Nozawa is thrilled to see Gohan’s family make an appearance. She also leaves absolutely no doubt about the revival of the Red Ribbon Army, saying they appear in the movie and further noting that they are “horrible people”, but she cannot say much more than that at the moment.

Of note was the Q&A session with pre-selected questions from fans to the panelists. Below are the questions with a summary of the response, which are not transcribed verbatim.

The panel concluded with an announcement that all in attendance would receive a free poster of the movie’s promotional banner, itself prominently featured at the convention. 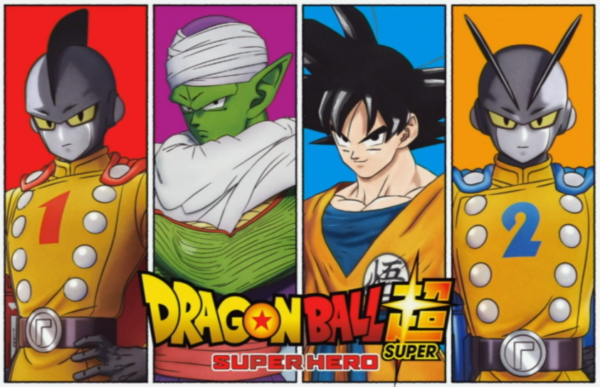