Each month, Toyotarō provides a sketch — as well as a brief comment — on the official Japanese Dragon Ball website for a character that has not appeared in Dragon Ball Super. Thus far, Toyotarō has provided sketches of #8, Lunch, Chapa with Oob, Tambourine, Man-Wolf, Tapion, Janenba, Broli, Ozotto, Ginyu, Bardock, and Paragus. For his belated December 2018 entry, Toyotarō has contributed a sketch of King Cold the Great, Freeza’s father: 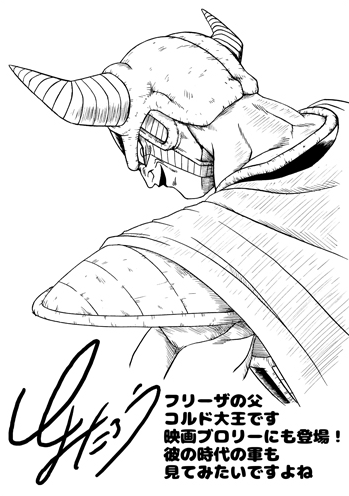 It’s Freeza’s father, King Cold the Great. He appears in the Broly movie, too! I’d like to see the forces he led in his era, as well.