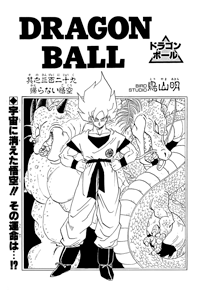 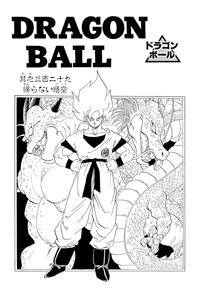 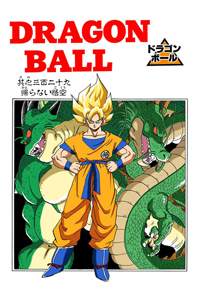 Gohan can’t believe that his father and Kuririn can’t come back to life, and Bulma explains to him why. Vegeta tells them to use their heads. He figures they should be able to move their souls to somewhere else and then return them to life. Bulma thinks that’s great, and Gohan says thank you and offers to shake Vegeta’s hand, but Vegeta smacks it away and says not to get caught up in the moment. Then he thinks to himself that he wants to try being a Super Saiyan also, and then he could surely win against him. Muri says they’re all grateful to the Earthlings, and want to stay on Earth until they find a new home. He asks if they could have a nice place to stay until then, and Bulma says they could live at her house. She says Vegeta can come too, since he probably has no money for a hotel. She offers to feed him lots, since he probably eats as much as Goku. But, no matter how charming she is, he can’t do anything bad. Vegeta thinks she’s a vulgar woman with a big mouth.

Bulma tells everyone to wait while she goes to those houses over there to borrow a phone and get her dad to pick them up. But first she asks Gohan what’s wrong, and he asks if he can stay at her house also. She says his mother will be happy to see him, but Gohan says he forgot to do his homework and his mother will yell at him. And so, Vegeta and the Namekians all stayed at Bulma’s house in West City. 130 days later, the Namekian Dragon Balls were restored, and they called the dragon, right there at Capsule Corporation. “Now, you may speak the first wish.” Muri tells them they can wait until next time, this time, use all three wishes, and Gohan thanks him. Bulma (who has longer hair now) asks to call the souls of Son Goku and Kuririn here, and Dende repeats it in Namekian. “I have called the soul of the one called Kuririn here. However, I was unable to call the soul of the one called Son Goku.” Everyone asks why. “Because that person is alive, and I cannot call the soul alone of someone who is alive.”

Everyone is glad to hear he’s alive, but then wonder why he hasn’t come home. Gohan thinks maybe his spaceship broke. Now Bulma says the second wish is to return Kuririn to life, and then he appears right in front of her and everyone else. Porunga says he gave a special service of restoring his body, and Bulma thinks he has a scary face, but he does good work. Finally, Bulma says to bring Son here. A pause, and then Porunga says he refused, as he wants to come home on his own. Gohan wonders why, and Kame-Sen’nin yells out that it must be because of his scary wife; the true strongest in the universe is the Super Saiyan Son Goku’s wife. Chi-Chi suddenly pulls out a sword, and Kame-Sen’nin backs off and says it’s a joke. Piccolo says how about they bring someone from Kaiō’s place back to life instead, if Goku wants to come home on his own.

Since Chiaotzu and Tenshinhan want to be together, they returned Yamcha to life. Then after another 130 days, they revived Chiaotzu with the first wish, Tenshinhan with the second, and moved the Namekians and their Dragon Balls to a new planet with the third wish. And so, about one year passed, and Son Goku still hasn’t come home. Gohan is sitting at a desk in his house wondering if maybe his father doesn’t want to return to Earth, when he suddenly feels something. He then gets a phone call from Kuririn. They’ve both noticed an incredible ki, a bad ki, approaching rapidly, and think it must be Freeza. Kaiō feels it too, as does Piccolo (somewhere in the wilderness), and neither can believe it. Vegeta (at a barbeque) is pissed that that damned Kakarrot didn’t finish Freeza off. Tenshinhan and Chiaotzu (somewhere in the mountains) feel not one, but two huge ki.

Sure enough, a spaceship just like Freeza’s old one is heading for Earth. And Freeza, who’s been restored with robotic enhancements, tells his papa that this is Earth, and that they’ve arrived ahead of that Super Saiyan. Freeza’s father, a huge guy who looks a lot like second-form Freeza, says it’s a small planet and they could blow it up in one shot. But Freeza wouldn’t like that. And he’s noticed via the radar that he (Goku) is on his way to Earth also, and they’ll soon see who is really the universe’s greatest. Gohan suits up and flies out of his house, with Chi-Chi asking where he’s going off to. 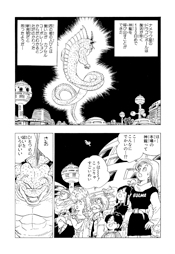 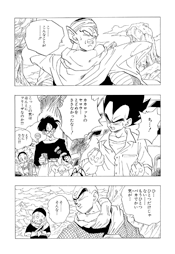 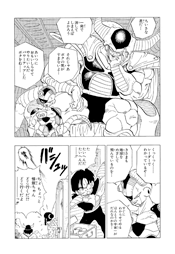