The Dragon Ball GT anime comic — comprised of limited-color screen shots from the 1996-1997 television series displayed in manga format with dialog and narration bubbles — began back in the January 2014 issue of Shueisha’s Saikyō Jump magazine. Running as a tie-in with the Dragon Ball Heroes arcade game’s then-current “Evil Dragon Mission” updates, the anime comic skipped all the way to and began with the series’ own “Evil Dragon” arc. Throughout all of the Dragon Ball Heroes arcade game’s continuing updates and even through the magazine’s transition from a monthly to bimonthly publication, the Dragon Ball GT anime comic has steadily run each issue, albeit plopped in different locations each time.

With its thirty-eighth chapter published this week in the magazine’s July 2019 issue, the anime comic reaches the end of the series, while splash text teases an announcement in the back of the issue: 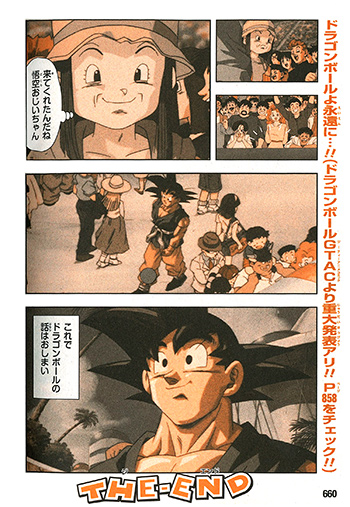 Saikyō Jump‘s end-of-issue preview for the September 2019 issue notes that, due to the series’ apparent popularity, the Dragon Ball GT anime comic will continue by wrapping back around to the (thus far non-adapted) beginning of the series next issue (due out 02 August 2019), providing a brief overview and tease of the main characters and story. 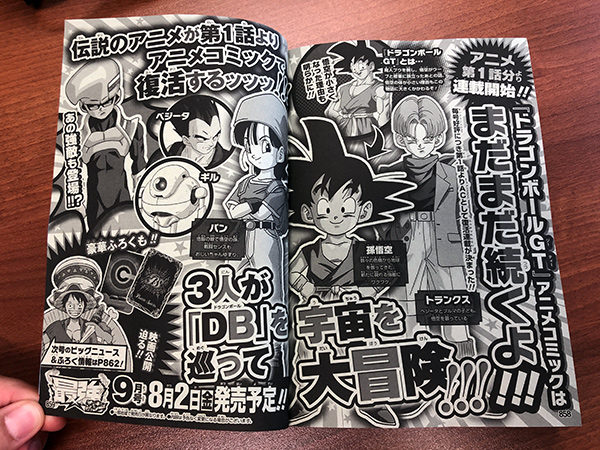 The July 2019 issue of Saikyō Jump was released 01 June 2019 and is still available for purchase via Amazon Japan.