Each month, Toyotarō provides a drawing of a Dragon Ball character — as well as an accompanying comment — on the official Japanese Dragon Ball website. Following up on the wealth of characters already drawn, for his June 2021 entry, Toyotarō has contributed a drawing of Chop Chai from the Afterlife Tournament filler arc of the Dragon Ball Z television series. 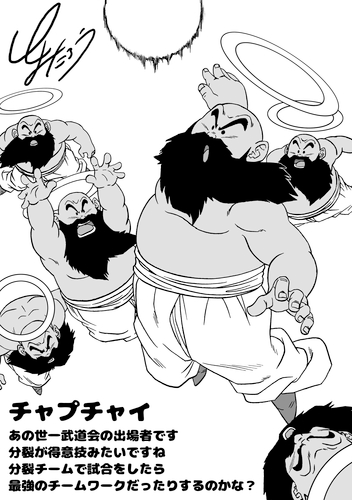 He’s a competitor in the Afterlife Tournament. His specialty seems to be splitting into multiple copies of himself. Perhaps doing a match on a team that’s made up entirely of yourselves is the best kind of teamwork?

Chop Chai is likely named after an Indonesian fried noodle dish called Chapuchai (チャプチャイ) in Japanese or cap cai in Indonesian. Many Afterlife Tournament characters are named for foods, with Migoren and Sarte both being similarly named after Indonesian dishes.

Toyotarō noted on Twitter that he will continue with the Afterlife Tournament characters for the foreseeable future in this monthly column.