Each month, Toyotarō provides a drawing of a Dragon Ball character — as well as an accompanying comment — on the official Japanese Dragon Ball website. Following up on the wealth of characters already drawn, for his August 2021 entry, Toyotarō has contributed a drawing of Papoi (and others!) relating to the Afterlife Tournament filler arc of the Dragon Ball Z television series. 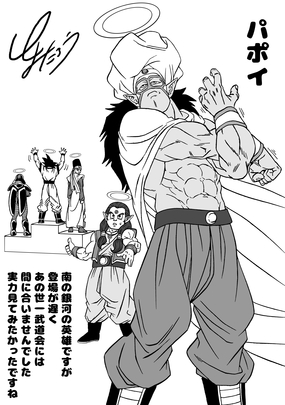 He’s a hero from the Southern Galaxy, but he showed up too late and didn’t make it in time for the Afterlife Tournament. I wanted to see what he could do.

Papoi was initially mentioned by South Kaiō only by name in Dragon Ball chapter 428; this scene was adapted in the Dragon Ball Z television series’ 207th episode with an actual design for Papoi, now present during the conversation.