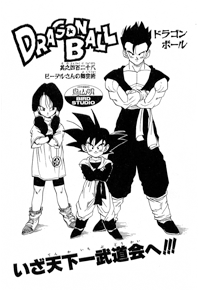 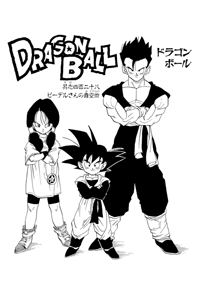 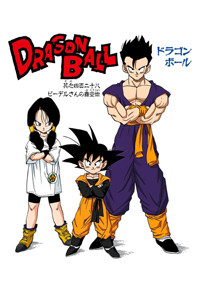 “Alright, I’ll teach you two Bukūjutsu, or rather, how to fly. It’s just ki control, and it’s not that difficult. If you think it’s jumping at high speed, that alone is no good, but…” Videl asks what this ki stuff is. “Eh!? Ki… You probably call it something else where you’re from. It’s the hidden ‘energy’ or ‘power’ within your body.” Videl still doesn’t understand, so Goten demonstrates by destroying a nearby mountain with a ki blast. Videl thinks that was a trick, but Gohan says not at all. Videl thinks it must be sorcery, then, so Gohan realizes he’ll have to explain all about ki to her. Videl worries that without ki she can’t fly, but Gohan says everyone has ki. It’s just hard to control. He tells Goten Bukūjutsu will have to wait, because first he must explain to Videl about ki.

Goten goes off to play, as Gohan begins to explain about ki. It’s not strength, first she has to get very calm, or else she can’t bring out her ki. Some time passes, and then they eat. Videl compliments Chi-Chi’s cooking, saying it’s better than her cook’s. Chi-Chi thinks she must be rich, and asks how many rooms are in her house. Fifty. Chi-Chi asks Gohan when they’re getting married, which promptly causes him to spit up his food. Later, Gohan says she’s already discovered ki, probably because of her martial arts experience. Videl asks if she can fly now, but Gohan says no. She still needs to learn to control it and use it freely.

Elsewhere… Goku is doing some weighted training, as Kaiō watches. Someone in a similar outfit comes up to him and mocks his training methods. Kaiō addresses him as South Kaiō. South Kaiō says this must be the North Area’s strong guy Son Goku, and asks how heavy those weights are he is using. Two tons. South Kaiō freaks out, but then calms down and says that would be no big deal for his South Area’s Papoi. Kaiō suggests he enter this Papoi in a fighting tournament on a planet called Earth in the North Area, and South Kaiō says okay. Then Kaiō asks Goku if it’s okay to increase the weights to ten tons, and Goku doubts he’ll be able to move. Kaiō says he can turn Super Saiyan, and Goku says it’ll be no problem then. Ten tons, one on each limb, making forty tons of weight. Goku can’t handle the weight at first, but after transforming it’s no problem at all and South Kaiō is speechless. He says that Papoi probably wouldn’t enter some dumb little tournament like that anyway, and then leaves.

Gohan is amazed that in only one day, Videl can already float a little. But then Goten suddenly zooms all through the air, and Gohan reassures Videl that he’s had much more experience with ki control. Videl says she’s coming back tomorrow, despite Gohan’s objections, because she wants to know more about ki. She pulls out the capsule for her plane and prepares to leave, but first, Gohan says her hair would be better short. Videl bashfully asks if Gohan likes short hair, but Gohan thoughtlessly says short hair is an advantage during a fight. With long hair, it could get in your eyes, or an opponent could grab it. Videl then gets angry and tells him to mind his own business, then leaves. Goten wonders why she was mad, but Gohan has no idea, and worries about all this interfering with their actual training. The next morning, Videl shows up, with short, boyish hair, and wants to continue where they left off yesterday. Gohan doesn’t understand her at all… 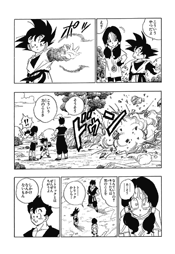 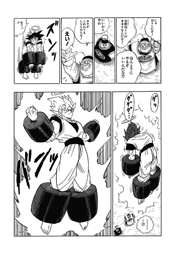 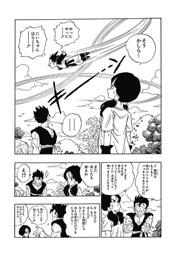