As far back as October 2012, Viz had been dropping hints that a new re-release of their English translation of the Dragon Ball manga was on its way. The company confirmed it in January 2013 with a small splash alongside ads for the then-current “Viz Big” edition (an omnibus release of the manga on larger, sturdier paper and with most of the color chapters from the series’ original run). The upcoming 3-in-1 then began receiving more and more ads within their digital Weekly Shonen Jump. 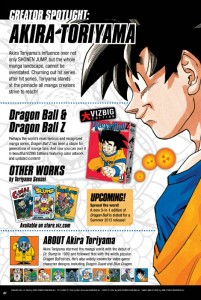 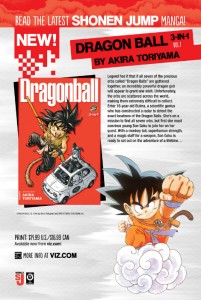 With so many releases already out there, as well as a complete run available digitally through their traditional-computer and mobile app storefront, what could Viz possibly offer fans that was not already available?

The review of this manga was made possible by a donation from “samuraix123”. If you are interested in contributing to the site, please visit our “Donate” page.

A re-release of the Dragon Ball manga from Viz in 2013, on the surface, seems like an odd choice. 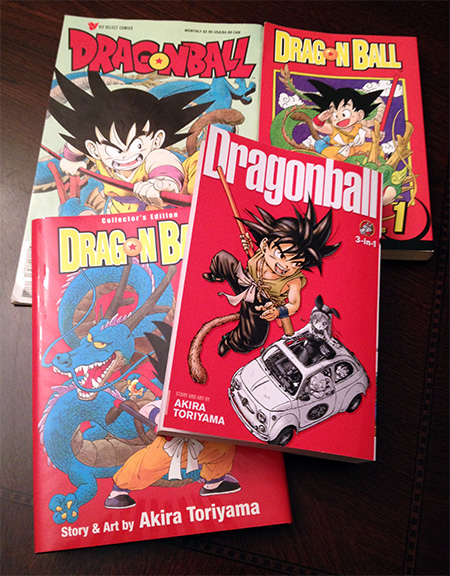 The company’s previous release — the “Viz Big” editions — were printed at a larger size on better quality paper, were also 3-in-1 omnibus editions (except where 2-in-1 compilations were necessary courtesy of the DB/DBZ break), and even brought in most of the color chapters from the original weekly run of the series. The “Viz Big” editions are still on store shelves, and Viz confirmed to Kanzenshuu that they plan to keep them in print (for the time being, anyway) for the “collectors”.

The company has also moved into the digital realm more aggressively than any other manga company. Between their day-and-date release of Weekly Shonen Jump with Japan and their enormous back-catalog of volumes — including the entire 42-volume Dragon Ball series — Viz has print and digital versions accessible to an enormous audience.

With both the “Viz Big” editions still available and a digital app constantly tossing 20% sales off an already-discounted price, why release another print edition?

The cover art for Viz’s 3-in-1 release series is likely a non-starter of an issue for the vast majority of its readers. For the longtime Dragon Ball fans eagerly awaiting their “perfect” release of the series, it can be anything from a minor annoyance to a perceived kick-in-the-teeth.

From 2002 to 2004, Shueisha released the Kanzenban — or “Perfect Edition” — of the Dragon Ball manga in Japan. It was a premium re-release of the entire series on extremely high-quality paper, bringing an unparalleled contrast of print quality to the series. The original 42 volumes were also condensed down to 34 volumes; no content was cut, but rather more chapters were packed into each volume. The size of the Kanzenban was also brought up between the tankōbon and original Weekly Shōnen Jump sizes:

The covers for the Kanzenban all featured newly-drawn art by original author Akira Toriyama. The designs of the Kanzenban covers are being replicated by Viz for their 3-in-1 manga re-release: 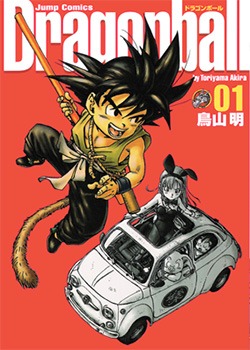 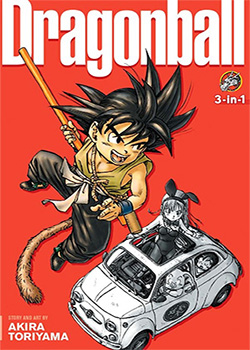 That is just it, though: this is not a Kanzenban-equivalent release from Viz. As you will read, the paper quality borders on atrocious, the print quality itself has blemishes and mistakes, the translation retains the same quirks and mistakes as it has since 1998, and promises of an “uncut” release — written directly on the back cover! — go unfulfilled.

A cover art choice that mirrors an objectively-better release of the manga that does not even touch Viz’s own previous release (the “Viz Big” editions) would be easy and even understandable to take as an insult: “Look! Here’s the Kanzenban cover art without any of the benefits what-so-ever!”

That being said, there is likely no malicious intent by Viz with their cover art choice; these “new” art assets were just sitting around waiting for a chance to be used. It is unfortunate for the fans that know, and will fly completely over the heads of fans that have no clue.

First thing’s first: this is not an uncut release.

Though promises of “Goku’s junk” (thankfully…?) carry through, other examples of content editing remain. Most of this relates to Bulma’s breasts (which bring up questions about double-standard editing), but there are other examples, such as a middle finger tossed up at Pilaf turned into an index finger. 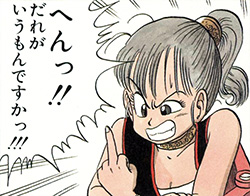 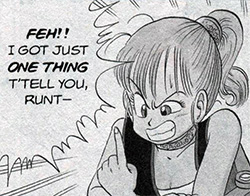 Early on in the manga, Viz’s censoring examples are almost exclusively cases of nudity, and it might be easy to dismiss these changes as acceptable under a blanket “let’s not show naked kids” modus operandi. This changes as the series becomes more violent down the line with, for example, the removal of guns (thankfully without walkie-talkie additions). Censoring continues with dialog changes beyond simple adaptations, with one of the silliest examples being a standard curse from Vegeta being changed to simply “!!!”

There is no good answer or even balance to these issues with Viz’s release. If you want their English translation of the Dragon Ball manga, it is going to be censored in some capacity, and increasingly so in certain ways as it makes its way to the end of the series.

OK, so we mostly have the same censored version as before. What about the rest of it?

One of the ways the 3-in-1 releases from Viz can be priced the way they are is due to the stock of paper used. Anyone who has ever picked up a Japanese Weekly Shōnen Jump will be familiar with what Viz has for you: very thin, bordering-on-translucent paper. Rough handlers need not apply, and readers with younger siblings or children of their own may wish to keep it out of their hands. The opposite side of any given page is clearly visible in the blank space, so fans looking to truly admire and examine Toriyama’s sketches will be gathering the Dragon Balls to wish for a better release. 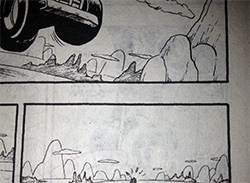 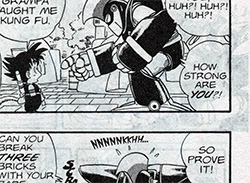 Printing smears and other errors with lost detail occur often enough to also be a major turn-off, particularly when a large amount of black ink is used… and considering Toriyama’s aversion to shading, this is quite often: 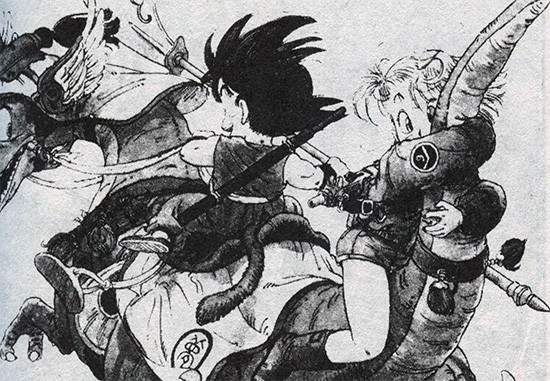 It is a cheap release, and you certainly get what you pay for.

The first volume of Viz’s 3-in-1 edition covers (naturally enough) Volume 1, Volume 2, and Volume 3 of the original tankōbon run of the comic, spanning chapters 1-36.

The first three volumes of the Dragon Ball manga have been released and re-released countless times in a wealth of languages. By this point, you likely know the story of the young monkey-boy who meets a girl out in the mountains who proceeds to make great friends, battle great foes, and compete in great tournaments.

Son Goku at this young age is an essential character to know and understand if you plan on making your way through the rest of the series. Everything about him is defined in these early chapters, and his relationships and fights down the road with other friends and enemies alike are more understandable and even relatable when you start with his humble beginnings up on Mount Paozu. 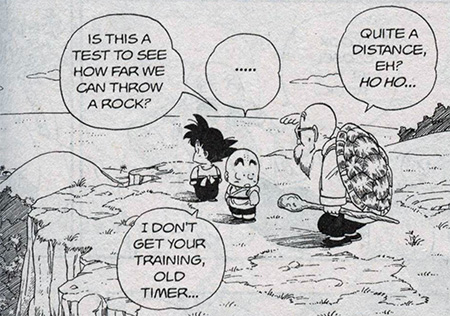 Pilaf is a wonderful early villain, with just the right amount of fourth-wall-breaking antics. Kuririn’s rivalry-turned-friendship with Goku is heart-warming one minute, followed by wanting to smack the little baldie for his conniving schemes the next. Looking through Kame-Sen’nin’s eyes as the two youngsters nearly trample him in power is fascinating so early on in the series, with just the right amount of (accidental/unintentional) foreshadowing about not letting power go to your head. The 21st Tenka’ichi Budōkai literally sets the stage for the types of battles we can expect for a decade of material to come, but keeps it light and humorous all the while.

We have covered this material time and time again, and encourage you to dive into (or perhaps back into!) our “Manga Review of Awesomeness”, a regular segment we produced on our podcast over the span of several years. Each time around with the segment we would cover a single volume of the manga, recapping its events and analyzing it from a variety of perspectives (folks who had read it in Japanese and in English, only in English, never before at all, etc.). For the first three volumes of the manga, check out Episodes #0063, #0067, and #0072. Volume 3 was one of our favorites from the entire 42-volume run, and we implore you to read it if you never have before!

Viz’s 3-in-1 edition would make so much more sense if we were not coming right off the “Viz Big” versions which were also 3-in-1 releases with much better paper and most of the color chapters. The price difference ($3) is not nearly enough to matter, and those looking to save the most cash will likely start diving into the realm of digital purchases, anyway… which Viz also conveniently has available!

If the past gives any indication, Viz is great at making promises with Dragon Ball, but rarely delivers on them. We simply have no faith in future volumes and re-prints of this 3-in-1 actually being uncut, which would be the only reason to bother choosing it over the “Viz Big” editions. Fans should not be doing the quality control after it is already released; if it says “uncut”, it should be uncut, and doing so would require not only careful examination of the art, but at this point, a complete re-translation.

It’s a good price, and it’s great material, but this is not the English Kanzenban-esque release you are looking for. In fact, it’s just not a good release at all. Move along.

Volume 1 of Viz’s Dragon Ball 3-in-1 Edition was originally released 04 June 2013, and may be available for purchase at the following retailers: