The “Press Archive” is a new section here at Kanzenshuu with the goal of documenting references to, articles about, and reviews for the Dragon Ball franchise from international (read: non-Japanese) media; think of it as a sibling to the “Translations” section. The section — which will only continue to grow over time — will generally only include items that are (1) at least 10-15 years old, and (2) from sources no longer available for purchase. In going along with our overall site mission, we believe it is important to document this history and the sentiment of the time.

For its launch, the “Press Archive” contains roughly 80 articles, editorials, interviews, and reviews from anime magazines (namely Viz’s Animerica and Shonen Jump) and video game magazines (namely Electronic Gaming Monthly and GameFan, with some selections from GamePro and Nintendo Power, as well).

With an admittedly-overwhelming number of items at launch, we thought that a quick list of highlights could help you on your reading journey:

It may be hard to imagine for some younger fans, but Dragon Ball video games existed before the PlayStation 2! Video game magazines were typically ahead of the curve when it came to import coverage and Japanese media. The very first issue of Nintendo Power previewed the upcoming Dragon Power game from Bandai, an adaptation of The Legend of Shenlong on the Famicom. Electronic Gaming Monthly‘s massive six-pages spread on Super Butōden 3 in their December 1994 issue introduced me to the Boo arc long before even fansubs, while the December 1997 issue previewed Final Bout and the in-progress syndication broadcast. GameFan‘s December 1996 review of “Dragon Ball Z Legends” showed the second-generation American fans there was an entire, contemporary world of DBZ video games available to us with the help of a modchip or Pro Action Replay.

In many ways, reading through the opinions and sentiment of a pre-FUNimation era shows how Dragon Ball discourse was sidelined for so many years by the dub and its various production issues. In the introduction to Animerica‘s November 1996 blowout on Dragon Ball, James Teal writes:

The magazine’s March 1998 spotlight on Akira Toriyama weaves a history courtesy of the various Daizenshuu interviews, material that would not be translated properly in full for years to come:

A later power-up form, Fusion–the process of two warriors combining into an even toughter [sic] form, such as Trunks’ and Goten’s Fusion power-up, Gotenks–had this origin: “I was having a conversation that there’s nothing stronger than a Super Saiyan,” laughs Toriyama. “Usually, Masakazu Katsura (Video Girl Ai) and I only talk about silly things, but he said, ‘You can always fuse them together.’ I told him he said something useful for the first time.” The concept of Fusion increased the humor of certain fighting scenes, but Toriyama doesn’t see a problem with having more laughs than lacerations in his manga. “If the story got too serious, my own blood pressure would get high, and personally, I don’t like that. I always think that manga is completely for entertainment.” On the other hand, when Toriyama is asked to pick out his favorite original story for the Dragon Ball animation, he passes over the lighter tales and selects the story with Goku’s father, Badak. “It’s a pretty dramatic story that I’d never draw myself. I got to see a different kind of Dragon Ball in a good way.” 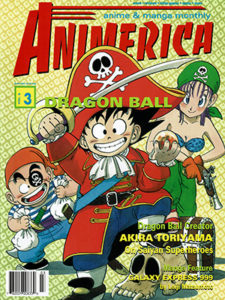 While we at Kanzenshuu always prefer to translate from the primary source whenever possible (that being statements and answers in their original Japanese), sometimes the deepest we can go is a feature that already includes translated statements. Akira Toriyama has not given an immense number of interviews to American publications, but there are a few key examples that are important to archive. These begin in 2003 with January and March issues of Viz’s Shonen Jump with interviews conducted during Toriyama’s trip to New York for the magazine’s launch party. Their 2006 interview spanned everything from drawing techniques to pets to in-universe questions, while their two-part “Interview with the Majin” in the October and November 2007 issues touched on the design work in the Boo arc and Toriyama’s kung fu inspiration.

This is but a small selection and highlight of the material available in the “Press Archive” for its launch. Please enjoy and look forward to more material coming to the archive soon!