Hiroshi Otogi’s DeSpo FighterZ manga came to a close in the September 2020 issue of Shueisha’s Saikyō Jump magazine, released back in August: 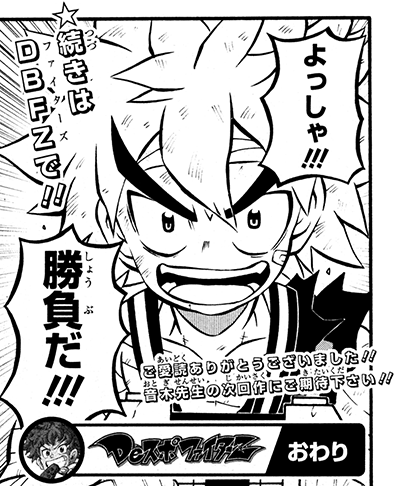 Thank you for reading!! Please look forward to Otogi-sensei‘s next work!!

Originally debuting in the September 2018 issue, DeSpo FighterZ followed a group of young protagonists in a world obsessed with eSports as they attempt to become the ultimate Dragon Ball FighterZ pro-gamers. The series’ first collected volume was released in December 2019 covering the first six chapters. Coinciding with the end of its serialization, a second collected volume was released 02 October 2020 in Japan for ¥500 spanning 224 pages:

The main battle of TFT, the national tournament for the fighting game Dragon Ball FighterZ, opens! With both pros and amateurs in the fray, Kenzo & co.’s team give it a shot to be the strongest in the battle to determine the top spot in Japan, but…?! It’s the conclusion of the story for Kenzo the Fighter and his friends!

Outside of its normal serialization, the series received one additional bonus chapter within the Jump Victory Carnival 2019 Official Guidebook. Both the first and second collected volumes are available for purchase on Amazon Japan.

The November 2020 issue of Saikyō Jump provided a small note indicating that Naho Ooishi’s Dragon Ball SD is on hiatus “for this issue”:

The series has been a staple of Saikyō Jump since its debut issue in November 2010, otherwise only missing-in-action for a single other issue (January 2017) since that time.