ABOUT OUR RUMOR GUIDE
Our Rumor Guide here at Kanzenshuu is an extensive collection of articles with comprehensive, well-researched, well-documented deep-dives into some of the most prevalent rumors in Dragon Ball fandom. There is always more to every story, so be sure to follow along with any additional links provided throughout the articles!

Scratch that (or, rather, hold tight on that): it is worth stepping back even further than that and establishing what we know about timeframes in the original source material!

HOVER OR TAP FOR MANGA TRANSLATIONS!
There are several manga panels used as examples throughout this article. Hover over or tap any of these to flip between the original Japanese text and its English translation!

It is widely accepted that the Boo arc from the original Dragon Ball manga and television series takes place during Age 774 in the Dragon World’s timeline. This is established through a series of checkpoints beginning in chapter 358, where Trunks inspects Cell’s time machine and says it traveled from Age 788.

Based on the various timeframes mentioned after this point in the series — both through a combination of character dialog and narration — we can safely place the Boo arc in Age 774. We can even get specific with a few major events, thanks to May 7th being the newly-established date for a Tenka’ichi Budōkai to take place, making the vast amount of the Boo arc known to take place over the span of May 7th to 9th in Age 774.

The 2008 Jump Super Anime Tour special — Heya! Son Goku and Friends Return!! — immediately begins by noting the fierce battle with Boo and Earth experiencing a period of peace after that (a specific setting and phrasing that resurfaces time and time again). After that, it is explained that the events of that special take place around two years later:

This places the special pretty squarely in Age 776. Without getting into the specifics of and larger conversation around canonicity, it is always worth a mention that the existence of Vegeta’s brother is referenced in the theatrical film Dragon Ball Z: Battle of Gods in 2013, not mentioned during that same conversation in the Dragon Ball Super television series in 2015, and then is once again brought up in the 2018 theatrical film Dragon Ball Super: Broly.

Even contemporary with its theatrical release, the events of Dragon Ball Z: Battle of Gods were confirmed to take place in Age 778, four years after the battle with Boo.

In conjunction with the release of the film, an exhibition called “Akira Toriyama The World of DRAGON BALL” toured Japan beginning in March 2013. In the exhibition’s guide book — which even calls itself out as a commemorative release (公開記念) to go with the film — an updated timeline of the Dragon World includes not only Dragon Ball GT, but the 2008 Jump Super Anime Tour special as well as the brand new film, Battle of Gods.

Battle of Gods is squarely placed — not “around”, but directly within — Age 778, on “a certain day of a certain month” (某月某日), hedging its bets and not specifically committing to, say, Bulma’s birthday on August 18th (a date established in a 1986 issue of Weekly Shōnen Jump). 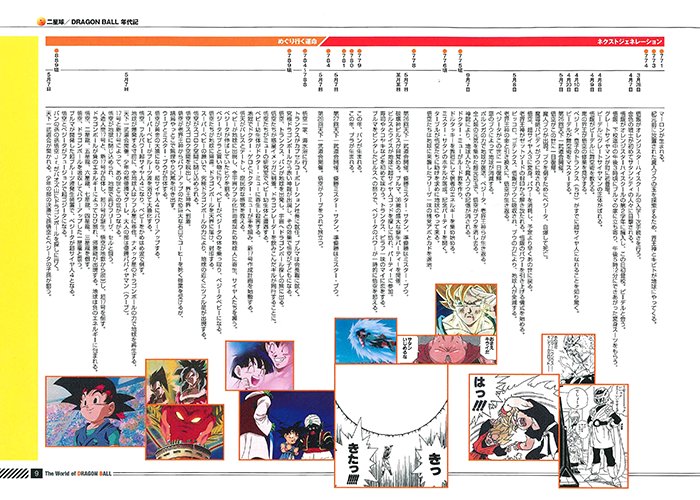 The fourth and final of the Chōzenshū — a revamped and updated version of the Daizenshuu volumes from the 1990s — hit Japanese book shelves on 09 May 2013, just shy of two months after Battle of Gods‘ original theatrical release. The guide book’s opening timeline (“Chronological Table of DB World”) features the exact same dates and verbiage as the exhibition booklet’s timeline, reiterating the Age 778 placement for the events of Battle of Gods. 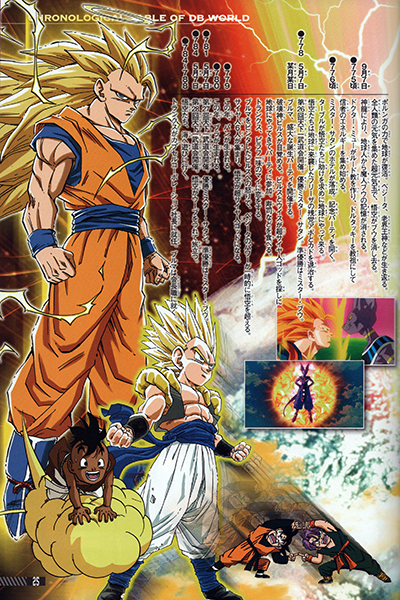 This is all in addition to certain events within the story of Battle of Gods “needing” to take place in Age 778 for later, established facts to make any sense: most notably the birth of Pan in Age 779, a fairly significant plot element within the film’s story.

ABOUT BULMA’S BIRTHDAY
Bulma notes during the film that she is celebrating her 38th birthday… which doesn’t line up with any established information. Fans often handwave this as her “lying” about her age, which could certainly be a possibility. What this may actually be an example of, however, is a bit of dialog leftover from Yūsuke Watanabe’s original script before Akira Toriyama came in and cleaned house. In Watanabe’s original script, the film was set to take place during Kuririn and #18’s wedding, which would have been sometime prior to the Boo arc. If Bulma was born in Age 733 — subtracting sixteen years from the “beginning” of the series in Age 749 — she would be celebrating her 38th birthday some time around Age 771. Marron is established to have been born in Age 771 in Daizenshuu 7, so the math largely works out. That all being said, it would ultimately be Bulma’s 45th birthday in Age 778. 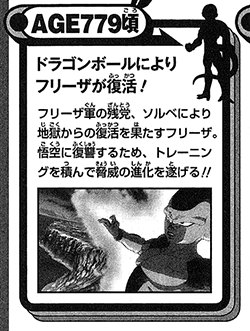 The Universe 6 Arc and Onward

The video game Dragon Ball Xenoverse 2 continues with the usage of Ages 778 and 779 for the aforementioned two films, and notes that the Universe 6 vs. 7 tournament — an arc exclusive to Dragon Ball Super, in that it had no prior film version like Battle of Gods and Resurrection ‘F’ — also takes place in Age 779. 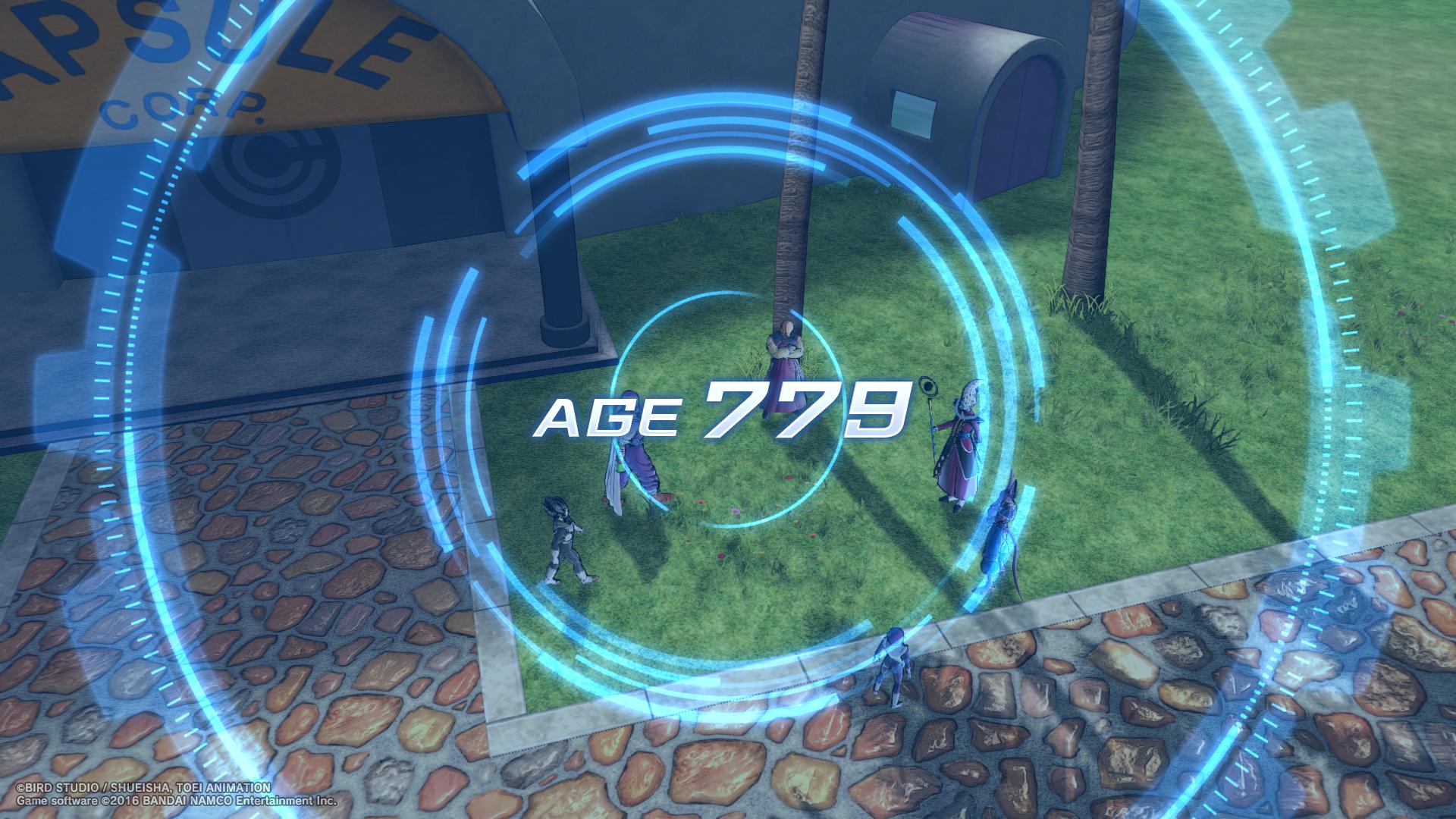 This particular arc and its timeline placement is worth noting because there is effectively nothing else pin-pointing exact years for any of the Dragon Ball Super-specific arcs: nothing in the television series, nothing in the manga, and nothing more of substance in the games. We certainly get references to time passing, but neither the characters nor the narrator ever call out a specific year as being the current one (and even events between the anime and manga may differ slightly due to different number of Dragon Ball usages, a headache for another day).

Toyotarō even coyly hedges his bets in manga chapter 14 by including convenient tears in a newspaper celebrating some kind of anniversary of 17 and 18’s defeat! 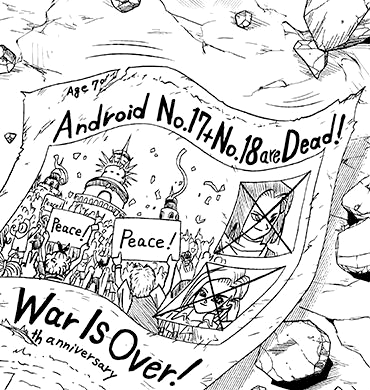 To some degree, these later Dragon Ball Super arcs do not actually matter with regard to the “six months” question, because of course more time can pass to help line them up with expected timeframes and milestone events, such as the birth of Bra (which itself already has a widely accepted year of Age 780, even with the conflicting notation of 778 vs. 780 within Daizenshuu 7, but that’s a story for another day).

Where Does “Six Months” Come From?

So where the heck does “six months” actually come from? This time span absolutely is directly mentioned… within the original manga, was always specific to a very certain series of events, and has nothing to do with Battle of Gods.

In chapter 517, Goku convinces everyone to let the “good” Boo live since he helped in their final battle. Kaiōshin says that Boo living on Earth would be a problem since people will be so afraid of him, but Goku responds that if they wait six months, they can use the Dragon Balls again and ask Shenlong to erase everyone else’s memories of Boo. 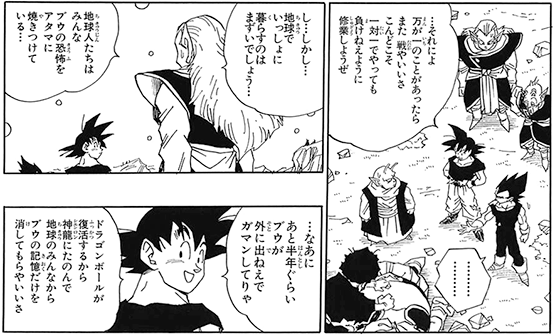 At the very end of that same chapter, the narrator informs the reader that six months later, the public’s memories of Boo were indeed erased, and that another ten years pass (often referred to as “End of Z” by fans; the final two chapters take place ten years later with Goku meeting Oob at the 28th Tenka’ichi Budōkai). 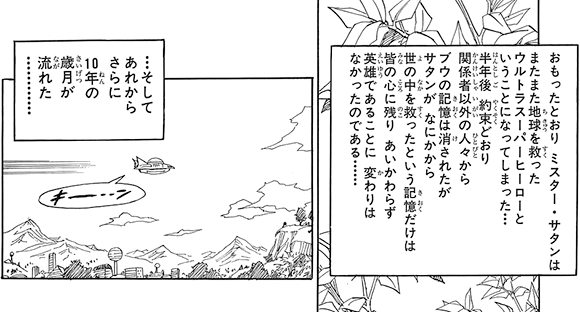 How Does “Six Months” Factor into Dragon Ball Super?

It is no secret that Dragon Ball Super suffered a rushed, troubled production. While viewers occasionally saw this directly on-screen in terms of animation quality, it would be no surprise to learn that there were crossed wires in other areas.

In the August 2015 issue of V-Jump (released 20 June 2015), it was noted that the series, “…depicts what happens ‘afterwards’ to Goku and the gang following the titanic battle with Majin Boo, and links up with the movies Battle of Gods and Resurrection ‘F’!!” Additionally, the column notes that Goten, “…heads out on an adventure with Trunks to find a gift for his soon-to-be sister-in-law Videl.”

Roughly a week later, the 2015 #31 issue of Weekly Shōnen Jump contradicts this last part by noting that, “…newly-weds Gohan and Videl are living happily.”

Are they soon-to-be-married or are they already married?

It is here in the same column that “six months” rears its ugly head, with episode 1’s description literally starting with the unambiguous phrase:

Six months after the fierce battle with Majin Boo. 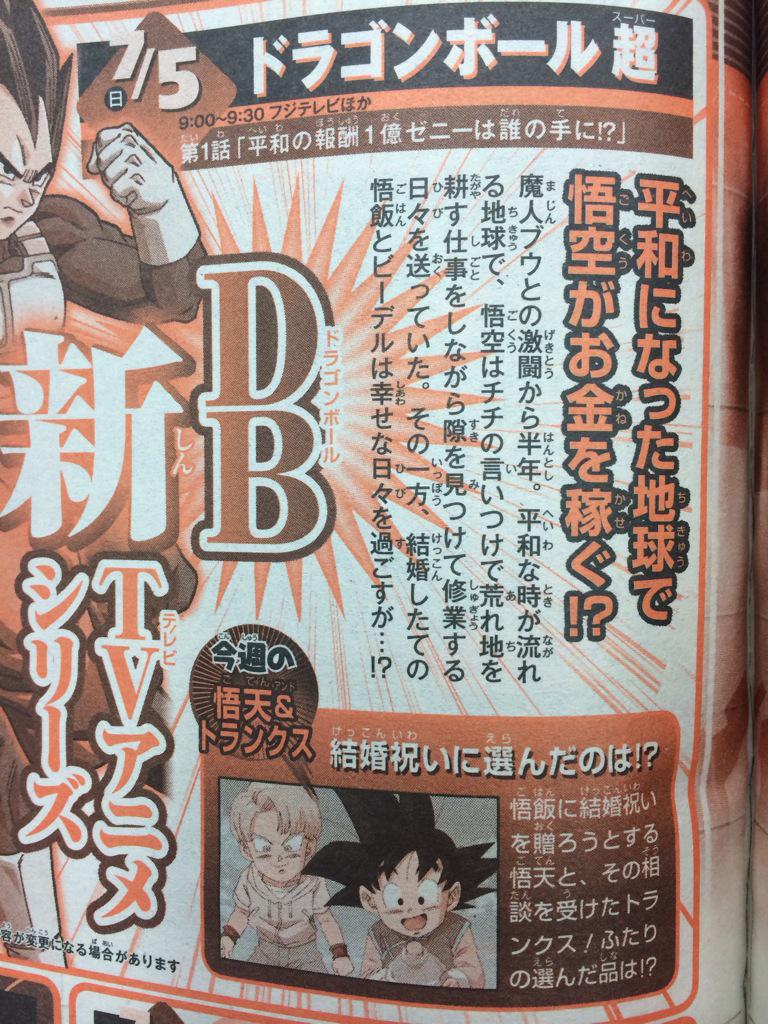 What Does Super Itself Actually Say?

Chapter 1 of the Dragon Ball Super manga — which actually pre-dates episode 1 of the television series by about two weeks — notes that Earth has been saved from Boo thanks to both Son Goku and Mr. Satan. It then goes on to say: 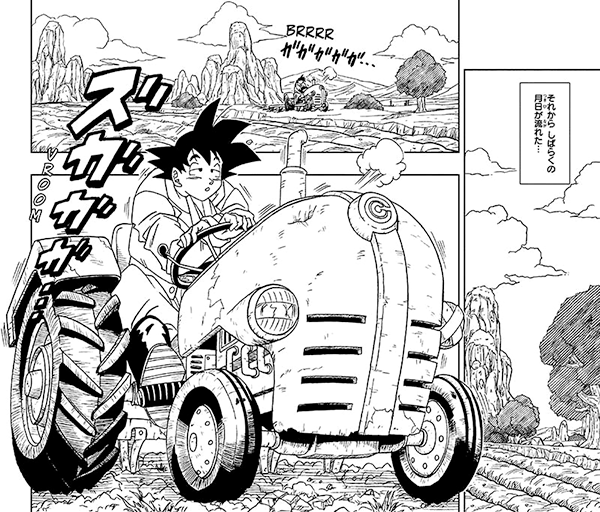 Episode 1 of the television series provides the same situational context, going so far as to use actual footage from the original series (by way of Dragon Ball Kai: The Final Chapters), concluding with what is effectively the same phrase:

This final bit of phrasing should almost certainly be adapted as “Some time passes…” but is, unfortunately, adapted both in Toei’s original simulcast subtitles as well as FUNimation’s (now Crunchyroll’s) subtitles on the home video release as some variation on a few “months” passing:

The heart of the matter with regard to this translation is that 月日 is most often used as a non-literal expression, showing the passage of a significant but nonspecific amount of time. It does not have to be less than a year, and a glance through some everyday usage shows meaning where more than a year is clearly meant. That said, the term more ambiguously expresses the idea of years passing.

So What’s the Answer?

The “six month” timeframe was always and only ever about the time it took for the Dragon Balls to be activated again for the gang to erase the public’s memory of Boo. This information was baked into the original manga, and mentioned twice in the same chapter, both by a character and the narrator.

The “six month” timeframe that Dragon Ball Super addresses is this exact same six month timeframe for the wish, and has nothing to do with when the events of Battle of Gods take place.

The time that then goes on to pass after the wish to erase the memories of Boo is almost certainly a period of multiple years, and there is no reason to believe that the readapted events of Battle of Gods as seen within the Dragon Ball Super television and/or manga series should be seen as taking place in anything other than Age 778.