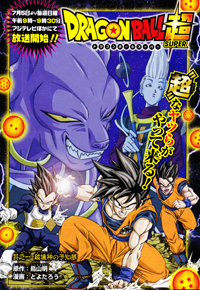 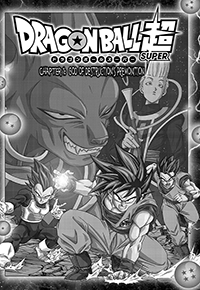 The God of Destruction’s Prophetic Dream

The world is finally at peace with Son Goku having defeated Majin Boo. As Goku is stuck working a tractor, Goten runs up with lunch. Goku is surprised to see his son who should otherwise be at school, but it is actually Sunday. Goku takes his lunch break and leaves the tractor work to Goten. Having regained his strength, Goku begins to daydream about fighting strong opponents again, moving his way from Freeza to Cell to Boo, all the while acting out his attack motions. Goten, distracted by Goku’s “training”, drives the tractor off a cliff. Goku quickly saves his son, and expresses his desire to go train with Lord Kaiō… but Chi-Chi would never allow it. Goku has to work to make some money, since even the Ox Demon King is broke now! Just then, Mr. Satan arrives.

Meanwhile, off somewhere in the reaches of space, an alien race tries to appease Beerus, God of Destruction, with an elaborate meal. The aliens appear confused when nothing happens after Beerus drinks up. Smirking, Beerus lets the aliens know he could tell it was poisoned, but something like that would never affect him. Trying to cover their tracks, the aliens next bring out their special soup, “Soup Yasai Jinkot”. Though Beerus pauses at the name, he has already made up his mind: the planet will be destroyed. Hearing this, the aliens arm themselves in an attempt to fight back, but Beerus casually blows them and the rest of the planet to smithereens.  Whis comments that Beerus has destroyed them just as he planned, but Beerus is preoccupied with a dream he just remembered.

Back on Earth, Goku is overwhelmed by the amount of money Mr. Satan has offered up. The 100 million zenny prize money came as a reward for saving the world, but Mr. Satan feels that Goku and the gang are the ones who truly deserve it. Goku is still overwhelmed by the amount and initially refuses, but when Goten explains that it is enough money for Goku to be able to forget about work and go train, that is all he needs to hear.

Beerus remembers the name from his dream: “Super Saiyan God”. This “Super Saiyan God” person is someone to rival even him… or something like that, anyway. As Beerus and Whis decide to return home, the Kaiōshin have watched Beerus destroy a planet and worry about what is to come. 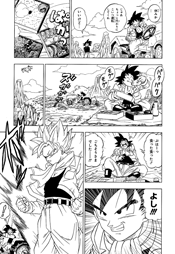 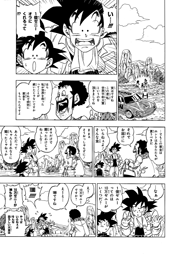 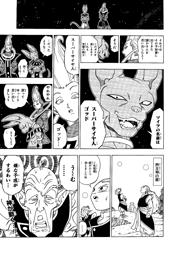