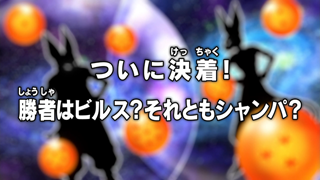 The Conclusion At Last! Who Will Prevail? Beerus, or Champa?

Goku’s Kamehameha cracks open the protective barrier surrounding the arena, threatening to suck the audience members out into space. Thankfully, Whis and Vados use their powers to re-seal the dome, restoring order. As things settle down, Beerus and even the referee are unable to locate Goku and Hit. The two turn are standing atop the huge floating portraits of Champa and Beerus. Piccolo wonders if this counts as a double ring-out, but Beerus and Champa explain that since the portraits are above the arena, they are fine. As the referee declares that the match will continue, Hit tells Goku that he dodged his attack by improving upon his Time-Skip technique even further. Hit’s growth is all thanks to him encountering an opponent as strong as Goku, and he intends to continue improving. Goku seems to be suffering some aftereffects from the Kaiō-Ken, but still smiles at Hit, who smiles right back at him. Seeing Hit smile freaks out Universe 6’s Kaiōshin, and Universe 7’s East Kaiōshin jumps in to explain that this is precisely the sort of strange effect Goku has on people (Elder Kaiōshin, who said something similar last episode, yells at East Kaiōshin not to steal all his cool lines).

Hit approaches Goku and the two bump fists, then fly to opposite sides of the arena. As they prepare to recommence fighting, Hit shows off another new pose, which Beerus notes he must have invented to match his improved strength. Goku again feels aftereffects from the Kaiō-Ken, and thinks to himself that this could be bad. On the sidelines, Champa yells to Hit that Goku will not be able to maintain his Kaiō-Ken for much longer, so there is no need for Hit to directly engage him. He just has to play keep-away until Goku’s stamina runs out, and he will win for sure! Vados compliments Champa and this strategy, but Cabba is appalled, saying that Hit is far too proud to win with such cheap tactics. Champa tells Cabba to keep quiet; this is a battle between him and Beerus, and everyone else is just a pawn in their game! Hearing themselves referred to as “pawns”, Goku and Hit both glare at Champa, who falls back in alarm. Even Vados says she now wishes to see how their match will play out to the end.

Goku tells Hit to show everyone that they are more than just pawns. As they both power up, Goku thinks about how each member of the Universe 6 team has been a tough opponent, and he is happy to be fighting against the strongest one of them all. Vados notes that the dome looks like it is going to break simply from Goku and Hit’s ki alone. The two finally rush toward each other, and Hit successfully gets the jump on Goku with his improved Time-Skip, landing a devastating blow. Though it looks like Goku is going to fall to the ground unconscious, he manages to recover and nail Hit with a counterattack that sends him crashing into Champa’s portrait. Hit tumbles down onto the arena, but Goku is apparently too worn out to launch another attack. He floats in the air catching his breath for a moment, before dropping down onto the arena himself. The two of them kneel recuperating for a while, as the audience watches on in silence. Finally, they struggle to their feet once more. Goku turns to Beerus and asks that all the match rules be revoked!

Everyone is shocked, but Goku explains that with the match rules in place, Hit is unable to utilize his full power. As an assassin, Hit’s true skills lie in his killing techniques, but since the match rules prohibit killing one’s opponent, Hit is unable to truly go all-out. Goku says that if Hit had been using such deadly force, Hit might have killed him with that last attack. Goku apologizes to Hit for not realizing this sooner. Hit is amazed at how Goku seems unafraid to die. Champa applauds Goku’s sportsmanship and happily agrees to make this change, but Beerus angrily refuses, saying Champa merely wants to change the rules to benefit his own team. The two begin squabbling, and Goku sadly notes that it looks like they will not be finished arguing anytime soon. Hit says that after all they are merely pawns in a game, but Goku responds “for now”.

Watching the argument continue, Goku declares Beerus and Champa to be hopeless, and is suddenly struck by an idea. He tells Hit they can fight again some other time, somewhere without such annoying restrictions. With that, Goku calmly walks to the edge of the ring… and jumps off. After confirming that the rules are still in effect, the referee declares his ring-out, and Hit wins the match. Goku flies back into the arena and bows politely to Hit; meanwhile Beerus and Champa have stopped their fight out of sheer shock. Giving Hit one last thumbs up, Goku’s Kaiō-Ken aura fades away. Reverting to his normal form, he is seized by muscular convulsions, and collapses to the ground in pain. Piccolo rushes over, saying that Goku has been truly reckless. Hit walks away, saying to himself what a surprising fellow Goku is.

With Goku’s loss, the referee announces that the final match of the tournament will now be Monaka versus Hit. Each team is down to a single fighter! Goku manages to get to his seat, saying he will really have to lay off the Kaiō-Ken for a while, and Vegeta calls him an idiot. Beerus is furious at Goku, saying he does not know what he has done. Goku points out that he would not have been able to maintain the Kaiō-Ken for much longer, and would have just have lost at that rate anyway. It is all Beerus’ fault for taking so long arguing! Anyway, Goku’s not worried, since they still have Monaka, the strongest in Universe 7! Only Beerus, Whis, Piccolo, and Monaka himself know the truth: that Beerus lied about Monaka’s great strength in order to motivate Goku and Vegeta. Whis sarcastically assures Beerus that Goku’s right, everything will be just fine! Vegeta asks Piccolo why he seems so nervous, but Piccolo keeps his lips sealed. Monaka nervously walks out to the edge of the floating seating area and awkwardly dives down into the ring. Hit and Vegeta can clearly tell something is wrong, but Goku is oblivious, and simply praises Monaka’s movements for being so unpredictable.

Beerus moans that the situation is hopeless, and Monaka is sweating heavily as he slowly approaches Hit. Observing Monaka close-up, Hit quickly deduces the true state of affairs. As Champa rings the gong and the match commences, Monaka lands a single, limp punch on Hit’s leg. After a long pause, Hit suddenly cries out and flies out of the ring, landing on the ground. For a moment everyone is too shocked to say anything, but then the referee declares Hit has lost by ring-out. Universe 7 has won the tournament! The Universe 7 audience members cheer, while Monaka and Beerus both cannot understand what just happened. Goku is suitably impressed at Monaka’s strength, and the Galactic King declares that they need people like that in the Galactic Patrol, but Jaco protests. Goku painfully flies over and thanks his friends and family for cheering him on, and the Galactic King congratulates him on a nice fight. Goku thanks the king for explaining to him about the Time-Skip technique, shaking one of the king’s tentacles in gratitude. Seeing this, Jaco shrieks and the king shyly explains that this tentacle is actually his penis. Hit gets back up and flies off, saying “now we’re even”.

Returning to the Universe 6 contestant seating area, Hit tells Champa that he no longer wants the cube, and asks to be taken back home. Champa says Hit must be joking: Hit repeatedly disobeyed his orders, and immediately lost the final match. There is no way he is going home alive now! Hit anticipated this, and braces himself to fight Champa. Cabba protests, but Champa shouts him down: the entire team has brought shame to him, and must now pay the price. Goku tries to intervene as well, but Beerus stops him. The matches are over now, and the Gods of Destruction can dispose of their contestants as they see fit. As Champa says, they make the rules, and others must obey! Champa brags that not even Time-Skip or Super Saiyan are any match for him. He will show them just how scary a God of Destruction can be! As Champa rants on like this, Vados suddenly notices something, and brings Champa’s attention to it. Champa and Beerus both scream when they see three strange figures down in the ring: a small being flanked by two tall, skinny ones. Goku asks who it is, but Beerus can hardly believe his eyes. It’s the Omni-King!

Next Time:
“Come Forth, Dragon of the Gods — Grant My Wish, Pretty Peas!”