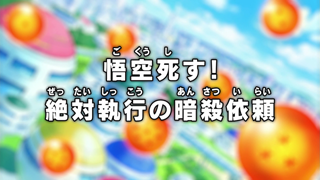 Goku Dies! A Hit-Job That Can’t Be Refused

As Vegeta trains with Whis on Beerus’ planet in preparation for the “Tournament of Power”, Goku goes about his day on Earth shopping for groceries and spending time with his family. However, he has been acting strange lately, which has not gone unnoticed by Gohan and Goten. Finally confiding in them, Goku says that someone is after his life. Meanwhile, off on a distant planet, Hit finishes up an assignment and receives his next target — Son Goku! As Gohan fills in Piccolo, Goku notices Hits approach and inconspicuously flies off. Goku lands in a desolate area and powers up to Super Saiyan Blue, with Hit appearing behind him. As the others rush toward them, the battle unfolds and Hit quickly has the upper hand. Goku prepares to fire a ki blast, but Hit suddenly attacks with a single, invisible strike to Goku’s heart. As Goku falls to the ground, he fires his ki blast straight up into the sky and Hit departs, assignment complete. Gohan, Piccolo, and Goten soon arrive on the scene to find Goku, laying motionless on the ground, dead!

Goku quivers in pain before falling to the ground, his eyes glazed over. Gohan, Piccolo, and Goten soon arrive on the scene to find Goku, laying motionless on the ground, dead!

Earlier that day… Goku is at home, standing outside quietly meditating and intensely focusing on his surroundings. Chi-Chi yells that the food is ready and Goku goes inside to eat. As he eats (one grain of rice at a time), he wonders to himself why he cannot sense “his” energy, thinking he must be masking it on purpose. Goten and Chi-Chi watch on in bewilderment, when Goku suddenly tells Chi-Chi there are three cockroaches behind the refrigerator. Chi-Chi yells at Goku that he has been acting so strange lately, wondering what is up. Goku starts to explain what is going on, but then suddenly rushes to the door, throwing it open to find the mailman, who is completely startled. Goku apologizes…

Meanwhile, Vegeta is training with Whis on Beerus’ planet, but Beerus is more interested in Goku’s training. Whis informs him that he has not been coming here to train, and he is not really sure what Goku has been doing. Beerus is irate and begins to panic, since the “Tournament of Power” could begin at any time of Omni-King’s choosing. Vegeta on the other hand is upset to hear Beerus say Goku is the top fighter on the team. Beerus tells Whis to take responsibility of Goku and walks away. Whis silently smiles, and Vegeta thinks that Whis knows something that he is not saying… Whis then tells Vegeta they will continue with their training, but Vegeta presses Whis about what Kakarrot is actually doing. Whis pauses before telling him he does not know what Goku is doing, and so Vegeta vows to train ever harder to surpass Kakarrot.

Back on Earth, Goku is walking back from the super market carrying a bag of groceries and a giant fish. Gohan and Goten are watching him from afar, and Gohan suggests they need disguises or they will surely be spotted. Gohan transforms into Great Saiyaman and holds out a similar outfit for Goten, but he opts to only wear the sunglasses. Goku is now walking around with his eyes closed, focusing on finding something. As Gohan and Goten follow, Goku begins walking through random areas, causing confusion and annoyance among people in the city. Goku starts looking everywhere around the city, wondering where “he” is. As he crosses the street without looking, Bulma comes driving along and crashes into Goku. Bulma begins scolding him, and Gohan thinks this is all very strange. They are going to have to ask him directly what is going on, maybe over dinner.

That evening everyone is at Videl and Gohan’s house, enjoying a delicious spread of food. After finishing all the food, Goku relaxes on the swing set outside. Gohan and Goten then confront him about what is going on, and Goku wants to know if that is why they were following him earlier. Gohan is shocked to hear he noticed, but is more curious about who he is looking for. Goku says they cannot tell Chi-Chi, but someone is coming for his life!

Meanwhile, somewhere on a distant barren planet covered in bio-domes, Hit stands waiting in the rain for his next assignment…

Hit, now in a populated city on another planet, walks down the street toward a large building near the center of the city. As Hit approaches he uses his Time-Skip technique to pass through the front gate and enter the building without alerting building security. The elevator then begins to rise, approaching the 50th floor. Security on the floor note that there are no scheduled appointments today and prepare to stop whoever is inside. The elevator doors open, but no one is inside. Using his Time-Skip technique, Hit exits the elevator and approaches a rotund man sitting at the desk on the other side of the room. Hit unfreezes the man, informing him that he is there to kill him. The man calls for his guards to stop this man, but no one moves or responds. Realizing he is the legendary assassin Hit, the man pleads and offers him all his money. Hit casually declines and then instantly kills him with one blow to his heart. Hit takes the man’s necklace and then disappears. As time returns to normal, the man’s guards find him dead on the floor, bewildered as to what has happened.

Back on his planet, Hit tosses the man’s necklace on a statue as proof of completion and receives a new assignment… Son Goku! Hit smiles, and walks away.

Piccolo notes that Gohan has been acting strange all evening, and Gohan fills in Piccolo about his father. As the two walk about talking and everyone is enjoying themselves inside, Goku senses Hit is on his way and suddenly flies off in hopes that no one else will get hurt interfering with their fight. Meanwhile, Gohan has finished filling in Piccolo, who is shocked to hear Goku is being targeted by Hit. Knowing this is serious, Piccolo looks over and notices Goku is gone.

Goku lands in a desolate area and focuses, finally sensing Hit’s faint energy. Knowing he is nearby, Goku transforms to Super Saiyan Blue and Hit appears behind him. Back at Gohan’s house, Piccolo suddenly notices that he cannot sense Goku’s energy anymore. “He must have become Super Saiyan Blue!” Goten runs over having sensed the same thing, and the trio fly off to find Goku.

Goku suddenly realizes Hit is behind him, and Hit informs Goku that he has been hired to him. Goku is surprised that he was able to sneak up behind him so easily, especially since he has been training so hard. Since he respects Goku, Hit has an offer for him: if Goku disappears, he will just say he killed him. Goku declines, and Hit says he expected that. With that he asks Goku to turn around so he can complete his work. His rule is to kill from the front with a single strike. Goku is intrigued, but insists his technique will not work on him anymore. Hit chuckles, saying he will not be so charitable as to use Time-Skip on him. Goku says he will not go down so easily and rushes at Hit, but none of Goku’s punches land and simply go through Hit. Goku prepares to fire a ki blast, but Hit suddenly attacks with a single, invisible strike to Goku’s heart. As Goku quivers in pain and falls to the ground, he fires his ki blast straight up into the sky. Hit promises to return for his funeral, and then disappears. Gohan, Piccolo, and Goten soon arrive on the scene to find Goku, laying motionless on the ground, dead!

Next Time:
“Can You Counterattack?! An Invisible Assassination Technique!!”

The overall credits listed follow a straight forward structure; the staff involved with the production of the series as a whole are listed in the opening credits and the staff involved with this specific episode are listed in the ending credits. All credits listed below are presented as they originally appeared in the episode’s initial broadcast, although errors have been corrected to maintain accurate and consistent spellings throughout the site. For more information and a complete listing of the series’ staff, visit the Animation Production Guide.