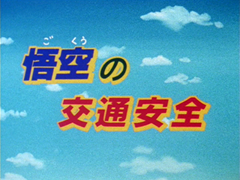 It’s Bulma’s birthday and Goku is on his way from Mount Paozu to West City for her party! Heading out of the mountains he runs into some trouble with a tiger, but after some persuasion he gets the tiger to give him some directions (only Goku would leave to the city without actually knowing where he’s going). Goku leaves the tiger in a predicament (hanging over a canyon), and proceeds to leap into the ocean, swimming his way towards Bulma’s house. Meanwhile, already in West City, Kuririn and Kame-Sen’nin are also having trouble making their way to Capsule Corp. They duck into an alley to check their directions, and as they’re debating which way to go, a young boy playing with a remote control car can almost gets hit by a truck! The truck driver curses out the kid and a policewoman runs over to see that everybody’s all right. The policewoman explains to the boy that you should always look left and right before entering onto the street, and judging by the skid marks left behind the truck, she also scolds the driver for speeding. Seeing this as a perfect opportunity, Kuririn asks the officer how to get to Bulma’s house.

At Capsule Corp., Oolong is preparing the food as Bulma sits at the kitchen table and dictates to him what he should be doing. Just as they begin to get into a tiff, the doorbell rings as Yamcha and Pu’er have arrived. Meanwhile, Goku has finally gotten out of the ocean and is now running through the farmlands and into the outskirts of the city. He arrives at a major highway and sees Sno trying to hitch a ride on the other side of the road. Goku tries asking if he’s arrived in West City yet, but Sno is having trouble hearing him, so Goku just goes ahead and runs across the highway almost causing a major accident. The horrified Sno explains to him that you should always check left and right before crossing the road, and only cross busy streets at crosswalks. Goku doesn’t seem very interested and reiterates that he’s looking for West City, and Sno tells him that she’s also headed to West City.

Back at Capsule Corp., Kuririn and Kame-Sen’nin arrive and find that Yamcha has also been recruited into cooking. Meanwhile, Goku and Sno begin walking through the fields towards the city, as Sno explains that she’s meeting with her relatives, and Goku explains that he’s attending a birthday party. Sno realizes that Goku doesn’t even have a gift for his friend, so once they get into the city Sno tries directing Goku to a department store. Completely ignoring what Sno had taught him about traffic safety, Goku runs right out into the street again, almost getting hit by a car. The policewoman from earlier sees all this and comes over to explain that you can only cross in the city when the walk signals are blue. Goku begins to cross, but the officer stops him again, explaining that once the light begins to flash it means that it’s about to turn red and you shouldn’t start to cross. Goku is still uninterested, but the officer explains that the rules must be obeyed for everybody’s safety. Goku finally seems to understand!

Back at Capsule Corp., everybody’s getting upset as they’re waiting for Goku to arrive before they start eating dinner. Meanwhile, back in the city, Sno spots the people she was meeting and the young boy from their group runs across the street to greet her. As he’s running across the street he is about to get hit by a car, but Goku manages to save him with the Nyoi-Bō. Once again the policewoman shows up, and Goku asks her how to get to Bulma’s house. Finally arriving at Bulma’s house, Goku is stuffing his face much to the dismay of everybody else. Goku tries to lighten the mood by asking if they know all the traffic rules, which sets everybody off into a big brawl! Goku and Kame-Sen’nin address us directly (talking to the screen), and make sure that we understand the importance of the traffic rules. They then all chase Goku into the street and the Policewoman blows her whistle and everyone salutes! The traffic safety parody of “Makafushigi Adventure” then begins to play!

The following excerpt was translated from page 122 of the Dragon Ball DVD Box Dragon Book:

The special videos “Goku’s Traffic Safety” and “Goku’s Fire Fighting Regiment” are both very rare productions designed to be educational films. They were both completed in June of 1988.

In “Goku’s Traffic Safety”, Goku is heading to West City to attend Bulma’s birthday party, and on the way he ends up learning the rules for getting through traffic. The movie was for children to watch so it would teach them how to get across a pedestrian crossing. Guest characters include an appearance from Lunch as a policewoman (she had the personality of Normal Lunch, but with the blonde hair), as well as Sno, who was first introduced during the Muscle Tower episodes. In one cut Namu appears as a passer-by going across at the pedestrian crossing, Oolong is helping cook with all his might, and you need to check out Yamcha in the frilly apron. For the ending, all the actors seem to be singing a traffic safety parody version of “Makafushigi Adventure!”, although it’s of pretty strange taste.

All credits listed below are as originally presented in this public service announcement. The credits for this features are listed in the traditional Japanese fashion of top to bottom, right to left (something not seen very often for credit rolls). For more information and a complete listing of the series staff, visit the Production Guide.

Movie Guide
Connect With Us
Support Us
Your support for Kanzenshuu is what keeps us going. You can help by donating to us directly, or by shopping online at certain retailers through our affiliate links below. Every bit counts and helps contribute to our server fees and bringing you new site content, reviews, and contest items.