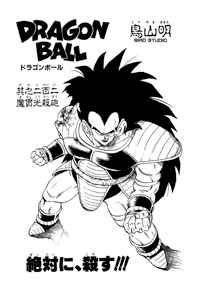 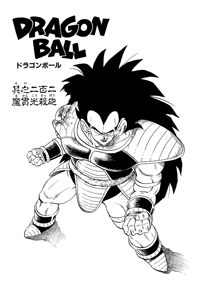 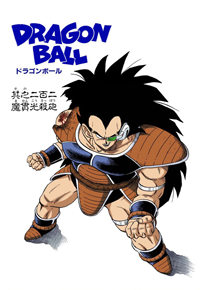 Raditz prepares to attack Goku, who can’t move, but then Piccolo fires off his Makankōsappō at Raditz. However… He only managed to hit his right shoulder. Piccolo can’t believe his speed, as Raditz starts to get seriously pissed over the minor injury. Piccolo thinks it’s all over, and Raditz prepares to unleash an attack, until… Raditz writhes in pain, because now Goku has his tail. Raditz can’t believe this, and Goku squeezes on it harder until he falls to the ground. Piccolo then tells Goku to hold on while he prepares another Makankōsappō.

Raditz begins to plead with Kakarrot about not killing his older brother. Goku tells him to shut up, but Raditz insists he’s had a change of heart and wants to quietly leave this planet. Piccolo yells at Goku to ignore him, but Raditz begs him to please believe him. Goku finally gives in and lets go, but Raditz gets up and elbows him in the face, sending him flying backwards. Raditz flies over and steps on Goku’s chest, saying he isn’t a true warrior. He, on the other hand, has no hang-ups about killing his little brother.

Raditz pushes his foot down hard on Goku’s chest, and tells him death is near as he screams in pain. Piccolo thinks Raditz will just avoid his Makankōsappō if he tries it again. And then the eye device suddenly starts to go off, as Gohan flies up out of Raditz’s space pod, destroying it in the process. 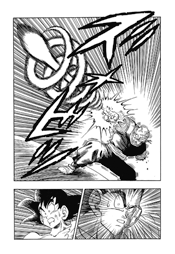 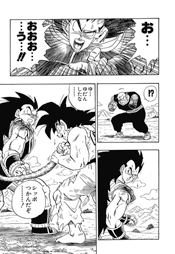 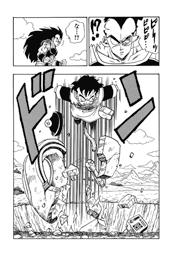