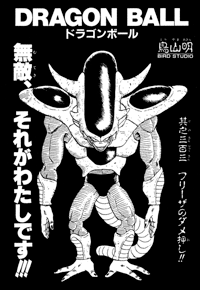 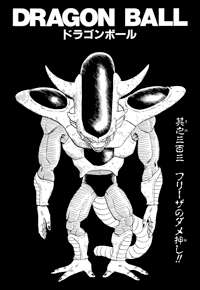 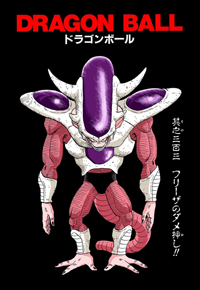 Freeza continues shooting at Piccolo, as Gohan comes flying in with a kick. Freeza flies over it, but Gohan flies above Freeza and fires a full power blast down at Freeza. It knocks Freeza down quite a bit, before Freeza finally sends it back up at Gohan. Before Gohan can react, Piccolo swats it away, and Gohan thanks him. Freeza thinks to himself how strange this brat is. “That brat didn’t have had a battle power like that before… It’s as though he’s become a different person after his revival from the brink of death… I see…!! That brat, he’s a Saiyan…!! But, whose child is he… About thirty years ago, I’m sure I destroyed all of the Saiyans, except for Vegeta, Nappa, and Raditz.” Piccolo is glad Gohan has gotten stronger, but Gohan says he’s still no match for Freeza. “He doesn’t resemble Vegeta or Nappa… Raditz’s kid, then…?! I suppose… I’ve seen that face somewhere before…” Freeza now wants to completely get rid of everyone with Saiyan blood. He doesn’t believe that stupid legend about a Super Saiyan, but he still doesn’t have a very good feeling with that brat and Vegeta rapidly getting so strong.

Vegeta grabs Kuririn and explains to him how a Saiyan’s strength increases after a near death recovery, and yells at him to hurry and nearly kill him. Kuririn doesn’t think he’s strong enough, so Vegeta says he’ll lower his battle power. Kuririn still doesn’t think he can do such a thing, even though he really hates Vegeta, and mentions that Goku will be revived soon. Vegeta yells that Kakarrot is a low-class warrior and can’t get as strong as Freeza that quickly. Freeza says that though he could easily obliterate them as he is, he wants to show them something more terrifying than death — his ultimate power. “I shall do you a great service!! My final transformation… My true form!!!” Freeza begins transforming again, and Vegeta yells at Kuririn to hurry up and do it now while they still have a chance. Kuririn screams, closes his eyes, and blasts Vegeta right through the chest. Vegeta falls to the ground, glad that he can finally become a Super Saiyan, as Freeza continues transforming. 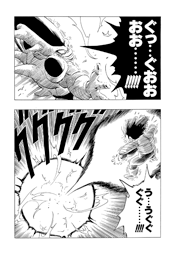 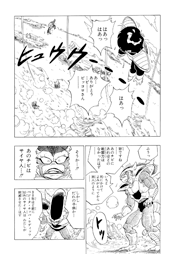 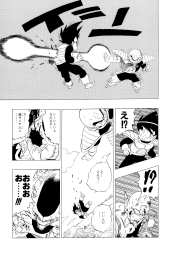