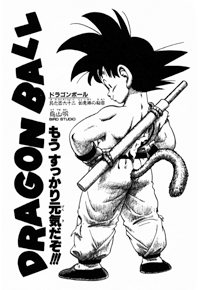 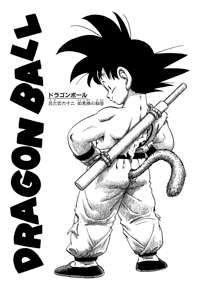 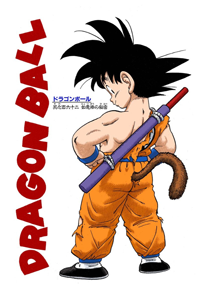 The Secret of the Nyoi-Bō

Up atop Karin Tower, Goku is celebrating his recovery. Karin congratulates Goku about defeating Piccolo, saying he was mostly sure that Goku would win. But not completely sure, and if Goku had died, he would’ve gathered the Dragon Balls himself and returned all the killed people to life. Goku is surprised to hear that Karin knows about the Dragon Balls. “Hmph. Of course I do. There’s nothing I don’t know!”

Yajirobe asks Karin just how he plans on reviving anyone with Shenlong killed, and Karin seems surprised to hear that. Goku gets pissed about this, and Yajirobe tells him its fate. Karin says the souls of those killed by the Demon Clan won’t pass on to the other world, as they’ll just float around in space, and Yajirobe’s glad he didn’t die. Goku thinks there has to be something they can do, and Karin tells him it’s hopeless without Shenlong.

Goku asks where this person is, and Karin tells him he’s at God’s Palace, up above Karin Tower. Yajirobe thinks he’s kidding, this is supposed to be the top. Karin tells him to hush, and explains that it’s floating high in the air above Karin Tower. It’s too high for them to even see it from here. Goku says he’ll just use Kinto-Un, but Karin says Kinto-Un can’t go up there. Yajirobe suggests using rockets, and Karin says there’s only one way to get up there. Goku is worried he’ll have to jump or something.

Karin says the way to get up there is pretty simple — the Nyoi-Bō. Karin explains that the Nyoi-Bō was once what linked this World to God’s Palace, until he lent it to Muten Rōshi. Goku realizes Kame-Sen’nin must have passed it on to Grandpa, and then Grandpa it to him, as he reaches for the Nyoi-Bō. But, it’s not strapped to his back, and Goku freaks out. Goku realizes he left it behind after fighting Piccolo, and calls Kinto-Un and goes after it.

Goku looks all over the battlefield, but he can’t find it, and he’s really worried, until he remembers, “When worried, see Uranai Baba…” So, Goku hops back on Kinto-Un and zooms over to her place. Goku explains to Baba that he wants to know where his Nyoi-Bō is, and tells her to hurry up and bring out the five people so he can beat ’em. Baba says she’ll give him a free fortune telling, though, because of the great things he’s done.

Baba hops off of her crystal ball and looks into it, and says it’s in this house here. Goku wonders why it would be at Kame House, then zooms off again. Baba says he really did rescue the world, and he’ll also be the first human to be able to meet God. The ghost next to her says he’s never seen such a great person before.

Goku bursts in the door at Kame House asking where the Nyoi-Bō is, and everyone’s happy and surprised to see him. Then Goku spots it, and rushes over and grabs it, saying how he’s going to return everyone to life by visiting God as he rushes out the door. Then he zooms off again, leaving everyone wondering what the Hell he was talking about…

Goku returns to Karin Tower, and takes a second to catch his breath. Now that he has the Nyoi-Bō, they can move on. So, the three of them climb out onto the roof of Karin Tower, and there’s a big connector in the center that has a little hole in the tip. Karin says to put the Nyoi-Bō in the hole, and then he can make it grow to reach God’s Palace. He gives Goku a little bell, and says it’ll prove his worth. Yajirobe thinks it would be impolite for Goku to meet God looking all tattered like that, but Karin says it won’t matter, since he’ll just get messed up again… 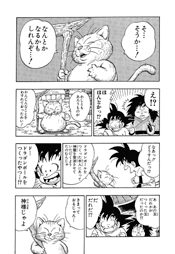 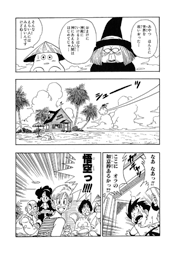 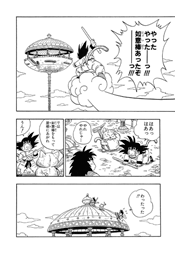