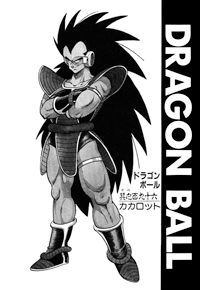 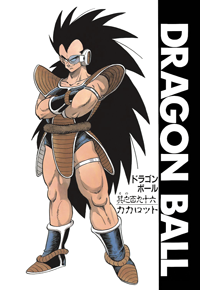 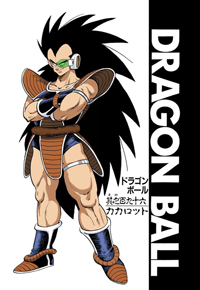 “Hello! Been a while!” says Bulma, as she walks into Kame House with her new short, boyish haircut. Kame-Sen’nin, Umigame, and Kuririn are very happy to see her, and Bulma has a gift for Kame-Sen’nin. He wonders if the gift is letting him feel her breasts, and so she slugs him. He says it was a gag as always, but Bulma says he’s a pervert as always. Meanwhile, Goku is flying toward Kame House on Kinto-Un! Kuririn asks Bulma about Yamcha, and she yells something about him being stupid. Then Bulma asks about Lunch, and Kuririn says she went off chasing after Tenshinhan five years ago.

As Goku approaches Kame House, he tells “someone” that this is Muten Rōshi’s house. Elsewhere, the alien says Kakarrot is moving really fast. Back at Kame House, Goku hops off of Kinto-Un still holding “someone” and shouts “Yahhou!” at the house. Kuririn recognize Goku’s voice, and elsewhere the alien says Kakarrot’s movement has stopped. And… Goku is holding a little boy in his arms. Bulma asks about the kid as she comes outside, and Kuririn asks Goku if he has a babysitting job. “It’s my kid.”

Kame-Sen’nin, Kuririn, and Bulma all freak out, as Goku puts the kid down. He’s wearing a fancy little dress outfit, and a hat with the Four Star-Ball on it. He politely greets everyone with a “Good afternoon”, and Bulma returns it. Goku says he’s named Son Gohan, and Kame-Sen’nin notes that he’s named after Goku’s dead grandfather. Bulma bends down and asks Gohan how old he is, and he says he’s four. Bulma is surprised to see Goku’s son has such good manners.

And then Bulma notices Gohan has a tail, like Goku used to, and her and the others ask if anything weird has happened on the night of a full moon. Goku says they go to bed early at his house, and wonders why they’ve asked, but Kame-Sen’nin dismisses it as nothing. Kuririn asks if he’s strong like Goku, but Goku says Chi-Chi gets mad when he tries to train him. She says since there’s peace in the world, there’s no use for martial arts, and it’s time for studying instead. Bulma then asks about the Dragon Ball on Gohan’s hat, and Goku says it’s Grandpa’s memento, the Four Star-Ball. He also has the Three Star-Ball and the Six Star-Ball.

Goku suddenly gets very serious, because he feels an awesome power headed their way. The alien then touches down on Kame-Sen’nin’s island, and says he recognizes Kakarrot even all grown up, he’s the splitting image of his father. The alien goes on about how Kakarrot should’ve wiped out all of the humans on this planet by now, and wonders what’s up. Kuririn goes up to the alien, thinking he’s drunk, in the middle of the afternoon even, and Goku yells not to get so close. But it’s too late. The alien whacks Kuririn through the house with his… tail! Everyone is shocked to see the alien’s tail, which had been wrapped around his waist like a belt. 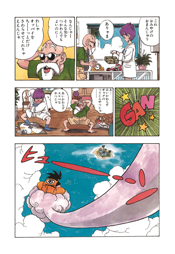 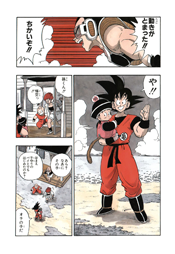 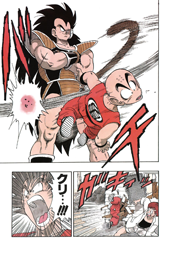